The Fire of an Inspirational Story 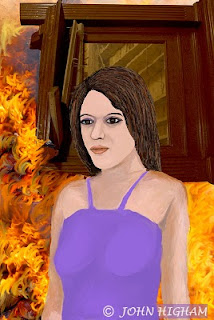 Nobody likes a depressing story. I’m determined to write inspirational stories, to inspire people to try harder. I already told the story of a man who refused to give up after both arms were severed, while working at the slaughterhouse.  He literally gave his arms to the company, mutilated himself to be a good employee, who ended up costing the taxpayer on workers compensation. Valuable tax dollars went to help Ned, who gave both arms to serve his company.


This story has a happy ending, although it’s not without controversy. Some people are opposed to the use of cells from aborted fetuses. However, this is no place for moralistic discussion. Stick to inspirational facts and leave out the commentary.
Thanks to cells from a miscarriage, Ned’s arms grew back. A pregnant dancer at a fetish club lost her baby while doing a nude dance. The baby fell out in a pool of burst water. Dr. Armstrong, a fan of burlesque entertainment, scooped up the fetus, took it to his lab, isolated the arm cells, which he then used to implant and clone new arms in Ned’s stumps.
Ned worked at a slaughterhouse. The cow never knew it was about to die as it walked up the ramp to the place where it would be instantly killed and whisked into an assembly line of gutting, bleeding and preliminary butchering. Ned lost both arms at the slaughterhouse. Thanks to a miscarriage and to the skillful work of Dr. Armstrong, his arms grew back.
The only catch, Ned was a short man, while the fetus was from tall parents. As a result, the arms grew too long. They hung down to his ankles. The arms were from a potential basketball player.
He became a celebrity of Internet learning videos and medical research. Dr. Armstrong received a slap on the wrist fine for doing a procedure not endorsed by the government. Religious fanatics felt it was not right to mess with dead embryos and to clone human limbs. That wasn’t the way God wanted it and it certainly wasn’t in God’s plan.
Ned eventually got a job in the circus. His long, powerful arms enabled him to do spectacular gymnastics and amazing feats on the flying trapeze. He was the only human to beat a gorilla in an arm wrestle. He was a potential super hero. With those long, powerful arms, he could scale skyscrapers and leap from rooftop to rooftop. He could reach deep into sewer pipes and drains. He could have been a long arm of the law to cut short those who reached over the limit.
He appeared on talk shows with the fetal mother, Lulu, who retired at thirty from her dancing career, got a PhD in psychology and became a therapist. Dr. Lulu Konzern wrote a book that won a nod from Dr. Jane Wormsly and got on her recommended reading list, The Cosmic Dancing of Ringtones.
Stay tuned for more unusual and inspirational situations, presented to you exclusively from the mind of Lohbado on Club Morono and on Dreaming Man.
Posted by Lohbado at 12:36 PM