attempt to write it all down 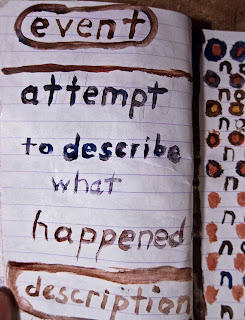 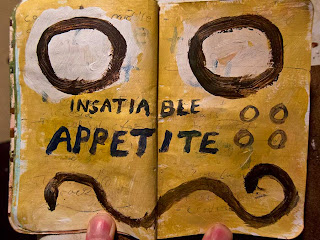 The Solid Conceptual Foundation (SCF) came to Lohbado in a dream and later while seated on a wooden bench at the laundry. Bear with me a little longer while I venture deep into conceptual territory and get lost in the woods, where, if one is lucky, one might meet Ursus, Oorsis, the big bear and receive a hug to boot.

Body heat and compression digested folded sheets of paper in Lohbado’s back pocket. The paper got squished when he sat down. It heated up and melded into a pulpy wad. Lohbado could unfold the wad and peel apart the sheets to see if he wrote anything interesting. Most of Lohbado’s writing consisted of random observations and comments, a lot of repetition. In the repetition, the pattern, habit or disposition of his mind emerged in profile, the mind of a wandering man who had trouble adapting to the way of the world. Often, a sense of futility caused him to drop his pen in mid-sentence to gaze into space.

As he got over the age of fifty, florescent light burned his eyes. Light from the street provided unrelenting glare. Some days the light hurt his eyes so bad, he could hardly keep them open. He tried writing with his eyes closed.

Sometimes his stomach growled. Several times a day his stomach craved food. It didn’t matter how much he ate, hunger would quickly return. Perhaps this affected his state of mind. Pain and hunger whipped him to wake up and do something. Get food. Rub the eyes. Go for a walk. Talk to somebody. Try not to be too selfish. To cut selfishness, try gazing outwards. Look at the surroundings. Listen to environmental noise and to what people are saying. A feast of the senses unfolds at the banquet of life.

Eat and be eaten.

What eats the body? Decay is the process of wearing out. From repeated exertion and handling of substances, organs and mechanisms wear out.

Before going to the laundry, Lohbado dreamed of going there. He dreamed of meeting an old friend in front of the washing machines. They sublimated their desire and love-longing into a discussion about how much soap to add and how full to fill the machines.

While writing this, Lohbado broke into sweat. Lohbado paused to take off his coat. He hoped his writing would be legible. Sometimes he couldn’t make out his own handwriting.

His hands suffered joint inflammation. Chronic pain made it hard to hold a pen, or to keep the hand steady. He kept going. Don’t worry about what people think. It will all be forgotten anyway. The demons are in your mind. Nobody cares what you do.

Washing cycle done, put wet laundry into a pack. Carry it home. Hang wet clothes to dry.
Posted by Lohbado at 11:21 AM