Lohbado and the Three Beers 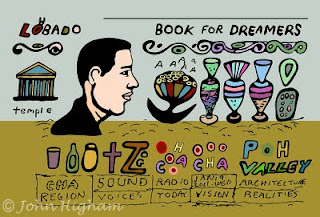 This is another post-apocalyptic tale, after angry factions wiped out over half the world’s population with nuclear weapons, not to mention environmental damage. Life was barely sustainable on planet earth during the apocalyptic century. Horrific loss of life resulted in a shortage of skilled workers to run machines and to operate computer software.


Computer networks suffered frequent shut down due to lack of personnel. An increase in computer viruses, worms, web crawlers, data miners and keystroke tracers put the computerized infrastructure at risk. This had an immediate effect on water quality, air traffic, the advance of microbes and entertainment systems.

To fill the ranks of software workers, enemies were put to work. Getting enemies to work for the government created nervousness among top administrators. However, just as drinking water could be extracted from heavily polluted rivers, just so could law abiding, standardized citizens be conditioned from those who previously were the enemy. Take the people who were fighting against you and make them work for you. That was the idea.

The first step in the rehabilitation process was to send prisoners to Regulation Training Programs run by the Department of Regulation. Even though Lohbado had never been involved in the war and had never even been near a weapon, in fact, he’d spent most of his life barely scraping by as a palm and aura reader, he was chosen as being a potential trainer. It never occurred to him that anyone would be interested in offering him employment. He’d been turned down for so many jobs over the years; he didn’t even bother looking for work anymore. He read the future for superstitious men and women and lived in a bombed out building. He got a little careless, venturing out in broad daylight. He underestimated the speed of change and that someone might be interested putting him to work.

After the devastating wars, every slacker was viewed as having potential. Even members of the Groveler’s Group were forced to enroll in Regulation Training.

Lohbado barely scraped through the Regulation Sessions. Poor attendance, difficulty remembering trivia, a mind that refused to grapple with skill-testing questions, Lohbado got put on probation and sent to the Chief Masticator. Every wing of the department had a Masticator to weed out those who manifested too much apathy and boredom, or psychological resistance.

Every morning before class, Lohbado would report to the Masticator’s office for a fifteen-minute briefing. He would be forced to talk about the proper way to wash hands, how to repair a broken Geiger counter, and the need to collect reusable toilet paper from melted down broken bottles. The Masticator would force Lohbado to spell his name forwards and backwards five times and then to do the forcible breath expelling wind from each nostril, while careful to collect mucoid particles, which could be used to glue labels on nylon toothbrushes.

One day, Lohbado had enough. He stormed out of the briefing session and wandered out of town, to one of the radioactive suburbs. After the mind numbing gibberish he’d been forced to endure for the past six weeks, he didn’t care about danger. He wanderer aimlessly into the lobby of a deserted hotel, filled with charred furniture and gaping holes in the floor. A certain breed of mutates, who had developed resistance to radiation, lived in such buildings. Lohbado felt so alienated from dealing with fellow humans, he almost welcomed the opportunity to communicate with mutates.

He walked up to the melted plastic registration counter and saw a pint of beer on a plastic barrel that had been up-ended to serve as a table. Lohbado, without thinking, picked up the mug and gulped down half the beer and then began burping. It was a soapy, sour kind of beer that sat uneasily in his stomach. He left the rest of the beer and wandered upstairs into the suite at the top of the stairs. On the floor, next to a bug-infested mattress, sat a large bottle of opened beer. Lohbado thought maybe a few more gulps of that beer would take care of the nausea welling up in his stomach from the beer he drank down in the lobby.

The beer tasted surprisingly OK, but didn’t quench his thirst. There was something weird in the beer that filled his throat with mucous and made him even thirstier.

Lohbado went up to the second floor. One couldn’t go any higher. The elevators were broken and the stair well gave off a nasty odor of ammonia. He went to a small room at the end of the hall where he found a king size bottle of Morono Extreme, 9 % alcohol content beer. Lohbado knew that was the beer he’d been looking for. He sat down on the bed, gulped down the beer and immediately fell asleep.

About an hour later, three mutates got home from collecting bricks, papa mutate, mama mutate and baby mutate. Papa mutate went up to the registration desk and right away noticed beer was missing from his pint.

“Someone has been drinking my beer!” he growled.

Mama mutate went upstairs and noticed beer missing from the bottle next to the moldy mattress.

“Someone has been drinking my beer!” howled mama mutate.

Baby mutate ran upstairs and saw the empty bottle of Morono Extreme. Baby was about to scream, but then noticed Lohbado, fast asleep. Baby crawled over to Lohbado, drooled in his ear. The drool woke him up. Lohbado shouted in terror, ran from the building and never went back to the radiated neighborhood again.