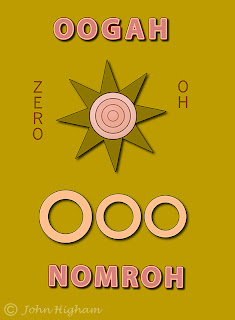 A white haired woman opened a wooden door and invited Lohbado to enter the kitchen, where a pot of beans simmered on a stove. In the steam rising from the pot, he saw dancing male and female demons, each filled with holes. They were holy spirits with many all-seeing eyes, which had watched over Lohbado since he learned to walk, the eyes he hid from during adolescent hormonal disruption and then the eyes he avoided, after his illusions were lost and he found himself in a dull, endless, flat gray plain, welcome to the real world.
Don’t offend the spirits, or they’ll cry. When their feelings are hurt, the screaming, weeping sound is like the sound of steam escaping between the lid and bottom of a pot. Gotta keep a lid on the situation, but not too tight, otherwise the pressure builds and the beans boil over. The bean spirits cry when they realize their attempts to control you are futile, that you are quite capable of turning down the temperature and giving the beans a stir. Do this, but without arrogance. Arrogance could lead to a nasty fall.
You could just say: “Look, this isn’t helping me at all.”
Maybe that would be a sane and wise thing to do. However, members of Club Morono have experienced the hurtful aggression of a man or woman suffering wounded vanity. Don’t wound vanity, unless you’re interested in being stung by a swarm of bees. Honesty could deflate the preceptor’s vanity, causing him or her to punish you. The preceptor of alienation is the master and you are the slave. Be careful. The preceptor even drops little reminders to let you know who is in control of the situation. The preceptor decides if your contract gets renewed or if you get laid off.
Honesty would not only deflate the master, it could lead to panic and embarrassment, which the master would express as moralistic rage, or righteous indignation. Unable to justify or defend his or her unjust power, the preceptor uses aggression and intimidation to silence the slave. The slave doesn’t want to lose his or her job, so he or she backs off and agrees to play the game, to participate in the illusion and to pretend everything is fabulous.
In an ideal world, one would welcome the shock of realizing one was in a bubble. It would be an opportunity to wake up from the stupor. As the bubble bursts, one could enter a larger space and make a contact with the genuine, as opposed to defending the tissue of lies. Instead of bitterness and alienation, in an environment of honesty and friendliness, creativity would flourish. Rigid power-based structure kills creative libido and consigns one to dullness and routine. One replicates one’s experience. One enters the worm-like stupor of endlessly muttering what one already knows, or mindlessly doing what has been done many times and which no longer needs to be done.
Posted by Lohbado at 10:55 PM