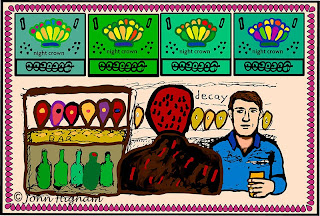 This story does have a happy ending, but it will take some time to get there, perhaps several posts over a period of weeks, months or even years. One has to survive the night, only to stagger through a series of days and nights, repetition. Put on the night crown and have a drink at the nocturnal Sea Breeze Bar.

Six months after the Apocalyptic War, Lohbado was arrested by enemy agents, outside the Sea Breeze Bar.
Lohbado often went to the Sea Breeze, especially after having a worrisome day. In the space of a week, most of the hair fell from the top of his head, in a classic, male pattern baldness manner, receding hairline, bald pate, ring of hair around the ears and back of the skull. He knew it was due to radiation. The only affordable apartment was next door to a contaminated block near the site of a nuclear plant which had been struck by an enemy missile.

Lohbado lost his massage therapy job, due to elevated radioactivity levels in his fingers. He carried a card indicating he was to avoid contact with fellow humans. People who knowingly spread radiation would be prosecuted. For nearly two years, he and a group of unemployed people, obtained contaminated food from condemned supermarkets. They broke in at night. Food expiry dates no longer mattered. Lord Food told Lohbado to eat, so Lohbado ate and drank.

Lohbado sat at the Sea Breeze bar and told the bartender, who wasn't listening, all about it. Normally he held back. It was considered bad form to complain. He was one among millions, struggling to survive in post Apocalyptic society. The good went to heaven and the bad stayed on earth, after the cosmic battle between Baby Jesus and Baby Lucifer.

The bar tender heard Lohbado muttering away and asked, "What's your problem? Are you a man or a worm?"

"Look, I hear all kinds of maudlin bar talk. How would you like to join Club Morono? Will you persist in your folly?"

"Have some Zog Juice," The bartender removed a sea-green bottle from a cabinet behind the bar. "This stuff is illegal.  A group of space aliens from Zog, a planet accessible only through dreaming, gave me the stuff."

Lohbado gulped down a glass of Zog. Zog juice was a liquor distilled from the breath and saliva of Zog people from Planet Zog. The breath's main ingredient was nitrous oxide and had an amusing affect on people who experienced a lot of worry, ie. laugh away worry. A rush of heat and relaxation spread throughout his rib cage. Tingling and popping sensations massaged the inside of his skull. Blue smoke swirled in peripheral vision. The bartender handed him a rag.

"You're drooling," said the bartender.

Lohbado had been taken prisoner during the chaos following the Apocalyptic War. So many people died during the war, there was a shortage of workers. The captors put Lohbado through a series of tests, which determined that he would make a good instructor. In order to be an instructor or trainer, he would first have to be broken down and then rebuilt. Captors forced him to undergo Department of Regulation training sessions. Break him down and then build him up with internalized messages, which he would then use to regulate himself. As a self-regulated zombie, he too would become a trainer, to betray and teach the precepts of alienation to his own people.

"Don't ever freak out," said the Club Morono representative, "You were chosen for your stoic temperament and for your ability to endure lies, contradiction, hypocrisy, abuse of power and absurdity. Should you flinch or show signs of crumbling, we'll pull you from the program and put you on the treadmill for the rest of your life. We're offering you this chance to explore the Agreeable World."

Lohbado got railroaded into the training sessions in a large gray building near the railroad tracks. On the first day, the Preceptor of Alienation walked into the room and introduced himself as director of the Regulation Training.

"I'm here to teach you what you already know," he said, in a friendly tone, secure in knowing no member of the captive audience would dare be rude or contradict what he had to say, "Today's topic is the effect of weather on mood. You must pay attention. No doodling or drooling, except to record figures, diagrams, words or sentences.

"Now, about the weather, it has been proven in a study conducted in 1952 by George and Linda Smiley from the Sunshine Corporation that weather affects mood. On sunny days, people tend to be cheerful. On rainy days, people tend to be sad. I personally once knew a man who would cheer up on sunny days. I also knew a woman who would become sad on rainy days. Perhaps you are familiar with such cases. At the end of this workshop, you will be able to identify and describe how weather affects your mood. Some of you might find you do indeed become happy on sunny days, while sometimes becoming sad on rainy days."

The Preceptor of Alienation then turned on the lap top, hooked to a projector and launched into a Power Point presentation. Participants were given twenty-page handouts to follow along. The hand out contained diagrams of sunny days and cloudy days, five pages about degrees of precipitation and mood variability. The preceptor proceeded, over the next two and a half hours, to read every word of the power point presentation, which was the same as what was printed in the handouts. There was so much material to cover, he begged students to note their comments and questions and save them for the end. They could continue on into lunch hour if necessary. He reminded them about the valuable opportunity of learning about weather and mood. Some people paid a lot of money for such training, whereas the captive audience was getting it for free.

Three hours later, Lohbado staggered out of the hot, smelly room. He went down the street to Bobo's Pizzarhea for coffee and a muffin. He gazed vacantly at the TV screen bolted to the wall. He watched a scene played over and over again about a shootout in Drambue. The image of a policeman with his boot on the back of the gunman, face down on the ground, kept appearing on the screen, every few seconds. He read the moving type at the bottom of the TV screen: another witness describes what happened.

Two women knocked on the Pizzarhea bathroom door. It was locked. A retired coffee drinker told them to get the key to the bathroom from the service counter. Lohbado watched and listened to the high heels click in a hurry to get that key.
Posted by Lohbado at 3:50 PM