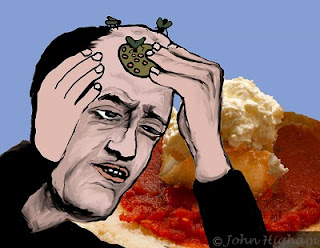 After years of turning his eye inward to contemplate his mind, or upward towards the sky, after stumbling into one too many holes and breaking so many bones, until every joint in his body burned and every bone felt like a toothache, until his chest experienced continual stabbing sorrow with each beat, Lohbado threw himself on the ground and didn't move for a long time.

"This pain is more than I can bear," he groaned, as if there were a god or somebody listening.

Nobody listening. If anyone were to walk by and see his histrionics, he or she would likely shake his or her head in dismay, embarrassment and revulsion towards such lack of motivtion and despair. How dare Lohbado lie there like that when there's so much money to be earned. He should be out there working, pulling his own weight, instead of burdening the earth with his unproductive presence.

Lohbado was having a bad day. It's hard to be a superhero when you're lying, face down in the dust, unable to go on.

Lohbado groaned, "Please, may the earth open and swallow me up. I pray for nothing less than complete and total annihilation."

The onlooker, Ruth Winters, got pissed off when she heard him talk this way. "You're displaying a bad attitude. Stand up like a man."

"I'm no longer a man," replied Lohbado, "I'm a worm, forced to grovel before those who have power."

"One day I'm going to become a millionaire, because then I won't have to pay taxes to support bums or the military," said Ruth,  "I'll create a giant corporation in order to receive government subsidies and to not have to pay taxes."
Posted by Lohbado at 11:50 AM