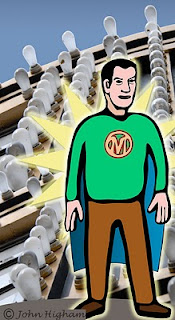 Morono Man, to prevent progressive decompensation, or downward sinking towards vegetable catatonia, bust up a band of a dozen loafers, who freeloaded or baked in sleep twelve hours a night, only to rise from the bed to be eaten by necessity, or to crumble under pressure. Morono Man appeared as an alarm clock, to awaken top administrators of Eepee Corporation from butter, blueberry biscuit stupor. Eepee Corporation manufactured plastic, electronic card chip devices designed to monitor and satiate appetite and desire.

Each time a person felt hungry or turned on, the card sent out Morono vibrations from the wallet, which could be sensed within a radius of one forearm. The bearer of the device would then pull out the card and read a list of suggestions and GPS techniques to help one experience effortless and effective satiation of hunger and desire. Premium subscribers to the Moronite service could log into sites that give off highest level, bliss-inducing biofeedback, pleasurable waves. For the weight conscious, stomach-soothing waves made one feel bloated, stuffed, content and self-satisfied, without actually having to eat anything.

Pre-release product advertising received good press and a positive public reaction. The government agreed to invest in setting up a corporation to produce the micro-card satiation devices (SMCDs) or Eepee Cards (EC). Eepee Cards shot high on the stock market. However, a group of managers began to mess things up. Twelve loafers ran the company, while marinating in hot, stewed plum offices with soft alpaca wool rugs and silk brocade cushions, luxuriously situated 52 stories above street level, in tall, rectilinear buildings. In fact, things were still in research and development phase. The GPS, or pleasure spot locators and hedonistic applications were filled with bugs.

The biofeedback/bliss vibrations sometimes gave off unpleasant jolts, hot flashes, nausea and sometimes embarrassing side effects, such as uncontrollable spasms of loud, smelly flatulence or bad-tasting sulfuric eructation or burping. In a few cases, the vibes created an a-hedonic effect, or marked loss of libido, even impotence, which could only be restored to default settings after much coaxing and coddling.

Emergency meetings attempted to take the matter in hand. Information about the situation should be released in a positive light, so as to not frighten investors, which could unleash a catastrophic loss of share-holder value. The twelve loafers, eight men and four women, decided to downsize, lay off workers and get fewer employees to do more. Severe cost-cutting measures, such as forced furlough, or forcing employees to take twelve unpaid leave of absence days per year, were undertaken. There would be no pay increases in the forseeable future. The top administrators would, however, grant themselves a bonus payout, since the survival of the company depended on the well-being of those at the top. There's always the trickle-down effect, where people on top piss on those underneath in order to instill in them a sense of security and fear. They experienced fear that if they didn't cooperate, things could get much worse. They would have to work harder in order to avoid having their jobs put on the chopping block.

Things weren't all peaches and cream for the twelve loafers, or top administrators. Their credibility was undermined when Pipi Leak MacFee published secret documents about orgies, fiscal corruption and kickbacks, or misappropriated funds. Pipi Leak MacFee was the thirteenth loafer, who got stung and pushed out of the administrative hive, since they felt twelve was company but thirteen a crowd. Filled with venom, MacFee revealed how the Eepee card consistently gave off bad vibes. Research results had been falsified. To restore confidence, the government handed over more grant money, in return for giant political campaign donations. To avoid a long and complicated description of what went on, suffice it to say, things were difficult for Eeppe Corporation.

Ok, this is merely to set the stage. Stay tuned for the next episode, in which Morono Man intervenes to bust up the band of loafers.
Posted by Lohbado at 10:05 PM