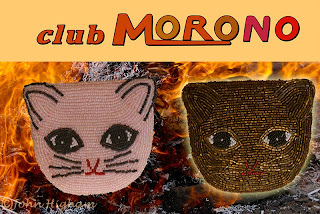 I tried to escape by crawling up an air vent inside cement walls. Half way up the crawl space, I panicked, realizing I was too far in to crawl out and too tired to crawl upwards any farther. I could get stuck half way up the vertical crawl space, die and rot. Eventually a vent cleaning person would be called to flush out the vent. This was a case for Morono Man. Read below, if you dare.

I'll tell you up front, in Club Morono, we rarely get a story straight. Frequent pauses for irrelevant digression sometimes make it hard to follow. However, if you feel it's worth reading to the end, you won't be disappointed, if you approach it without expectations other than to read and quite possibly find out what happened. Lohbado, slacker in the public eye, but in moments of psychic danger, Morono Man violated Moronite rules of conduct and was sentenced in the High Court of Morono burn in the fire. This is the outcome for those who sin. Good deeds go into one purse, bad deeds into the other. One purse will burn and melt, the other will glow and rise like a rainbow into the sky.

Here's how it started. Lohbado sat in the overheated corner of a crowded cafe during lunchtime and tried to read a book about reality, since he'd been told so many times to get real. He had a collection of books describing how one could connect with reality and arguments about how such a reality might be structured. He took off his boots to ventilate and dry sweaty damp socks. The cashiers wore white latex gloves. Her fingers tickled the palm of Lohbado's hand as she handed him change. Lohbado watched the four lineups of people at four cashiers and then plunged into the metaphysics text.

Ok, this is no time to let the cat out of the back. When burning up from inside, zip the mouth, stay cool and eventually the flames subside.

The nose is a type of triangle, opening downwards in two tubes. We're going to identify potential stimulants or particles capable of irritating sensitive nasal tissue and blocking passageways.  If we look at the tubular nasal triangle, you'll notice how particles get trapped in mucous and small hairs.
It requires a high level of internal management to manage internal matter such as dust, bacteria, microbes and prehistoric flies. I'll elaborate on the flies in a future session. I'll just mention, in passing, the danger of unlimited expansion and the inevitable post implosion.

The main questions to consider: Who are you? What do you have to offer? Has anyone here heard of Socrates? He was a corrupter of youth from ancient Greece, forced to drink poison after he got on people's nerves by asking them to clarify absurd and irrational statements. It's important to know how to present yourself when shopping for lingerie. You don't want to come across as being too eager or intense.
Posted by Lohbado at 8:16 PM