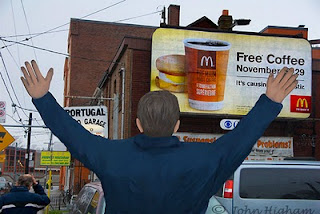 Morono Man has super power of smell. He can smell when people are trying to rip off the system in order to get a free cup of coffee. The other day, he caught a group of men cranking out counterfeit coffee cards. Each card would get the bearer twenty cups of coffee. Morono Man went in to bust up the operation, but he's got a heart of plastic and is a sucker for sentimental platitudes. No self-evident truth is too shallow for Morono Man.

He got them by the bean and freeze dried them on the spot, Columbian roast and put them through the grinder. The ring leader, Joe Espresso, said: "Please Morono Man, hear us out before you brew us up!"

Morono Man said: "Ok, go ahead, percolate, but no more than three minutes. I'm late for coffee and don't want to go into withdrawal."


Joe Espresso explained his sad story, in as few words as possible: "We worked at a pulp and paper mill in Wildzide. They shut down the mill and laid off eight hundred workers. Me and my buddies moved to the city to look for work. I tried to get a job delivering newspapers. They said my pulp and paper experience was not relevant. They said I was not qualified.

"You have to pay $ 15,000 for a six week course on delivery techniques and then you do an apprenticeship, after which you're allowed to purchase a $ 500 license, which permits you to join the Deliverers Association. You get paid minimum wage. The uniform is deducted from your first ten pay checks."

After Morono man heard this, he regretted his hasty judgment and said: "You are not gangsters, you're men in need of a cup of coffee. Punch me in the stomach!"

One of Morono Man's super powers was the ability to cough up money. With three punches to the stomach, Morono Man coughed up enough money to keep the five men in coffee, at the rate of six cups per day, for one year. The punches didn't hurt his soft cushion of a belly. They filled him with revulsion towards the way of the world. He was about to confiscate the counterfeiting machine, in order to break it, but Joe Espresso said: "Don't, don't don't!"

"It could be used for good purposes. We could set up a plastic credit card-making business. Please don't remove the only remaining possibility of earning an honest living."

Morono Man felt sorry for his hasty desire to destroy the machine.

"You're right," he said, "I misjudged you again. You're model citizens with good business ideas, which will enable you to live the dream of going from rags to riches, from small fries to large corporation."


The men thanked him.

Morono Man stumbled off into a metro, where he changed back into his mundane persona of Lohbado, an unemployed professional dreamer, who survived, thanks to the generosity of Morono Man, who was able to cough up money when needed.
Posted by Lohbado at 12:59 PM