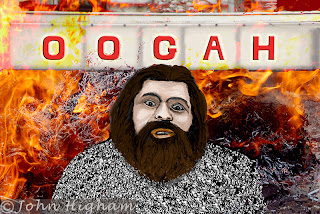 Turn to Oogah, the huge Oh, a portal, opening, a holy hole in the tissue of daydream. Oogah came in response to the Apocalyptic War of religion against religion, business against business, pill against pill, big fish eating little fish, haves bullying have nots, positive and negative. Lohbado sneaked into Grandmother Aida's boudoir and had a look at The Book of Oogah. He had no idea what it was all about until the age of thirteen, when an elderly woman asked him in for tea and cookies, after Lohbado finished cutting the grass. She asked Lohbado if his mother had told him the facts of Oogah.

Lohbado said the word Oogah was not unfamiliar. One night he heard his parents using the word Oogah, as he crept past their bedroom door. It sounded scary, so he quickly went away.

"Well Lohbado, " said the elderly woman, named Lohbada, "Did you see any worms when you were on the grass? Those worms are caretakers of the soil. They get washed up on the sidewalk when it rains. Robins love them, which brings me to the subject of flies, especially dead flies and how they sometimes fall off a window sill on to a pillow. In the old days, it was quite common to position the head of a bed under a window sill, so that the sound of insects buzzing between window panes would stimulate dream messages. Housefly hair, head top eggs, fingertip bacteria, egg tunnels into the skull."

Lohbado didn't understand what she was talking about. He knew that bacteria from fingertips could cause mold to grow on a block of cheddar cheese. He ate the moldy cheese and immediately a wave of drowsiness forced him to stretch out on the sofa. He went into a coma-like sleep and began to dream. In the middle of a vast, treeless plain, Lohbado dreamed a fire. He approached the fire, which appeared to be burning out of the rock. Then Oogah appeared and grinned at Lohbado. Lohbado trembled and wept tears of joy as the spirit passed through him. When he awoke, Grandmother was wiping his forehead with a lukewarm, damp washcloth.

"I thought you were dying," cried Grandmother, "You lay down and started moaning and groaning. Your forehead was so hot. That's why I applied the washcloth."

Lohbado trembled as Grandmother continued to wipe his forehead and then his face with the beige washcloth.

"May the light of Oorsis shine upon you!" she replied, "This is an experience to remember for the rest of your life. You should write it down, in order that your children and your grandchildren and great great grandchildren can remember that you, Lohbado, had a vision of Oogah."
Posted by Lohbado at 10:02 PM