The Story of Oh 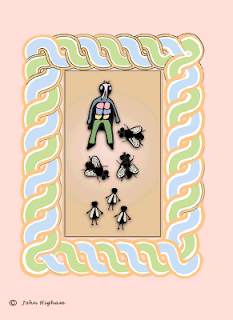 Everyday the background music, plus a typical reaction and set of thoughts, a mind rambling distractedly, blown about like a feather, as people hurried to the subway, lined up at bus stops or piled into cars, Lohbado went for coffee. After a refill, he'd write the same old nonsense, predictable spasms triggered by toothache, indigestion, background music or something in the news.


You could be sure Lohbado would have an opinion. You didn't even need to make out the words. The facial expression, posture and tone of voice said it all, a Lohbado template of mindless reaction. Words rolled under their own momentum, year after year, a pattern of emotion and irritation.

Lohbado was not alone. At Club Morono he met other Lohbadoes and Lohbadahs with similar opinions. This is something the Chief Nomroh talked about during a recent Rapture Session at the Tabernacle of Oogah and Oorsis, anthropomorphic representatives of God and co-creators of the non-evolutionary universe. Out of the many Ohs, OOOs, cosmic circles, portals, concentric, sometimes stretching into elipse, something was bound to pass through. O is asking to be punctuated with concept and goodwill.

Stand O on end and it will roll. O is one of the most powerful letters of the alphabet, almost as important as A. After a hearty throat clearing roar, aahhgrah, one could begin softly mooning Oh. I ask all radio listeners to join in this exercise. First say "moon", slowly three times. Then drop the consonants M and N. Put them in a folder for later. They will prove their point during the Morono Training Sessions, when enemy prisoners have their psyches broken down and then reconditioned into harmonious, socially cooperative group members.

OK, this would take too long, but it's something I recommend you try. I'm not saying you should go out in public and start mooning. But with regards to the rapture, if you've ever studied glossolalia, there's a section delegated to the letter O. In fact, there's even the Story of O.