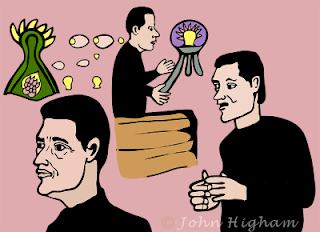 Lohbado heard boisterous laughter from the Bull's Blood Tavern. He went in and a waitress told him the bar was reserved for a meeting of the Goo Goo Underground, but if he wished to become a member, he would receive a free pint of Worker Bee Lager. Lohbado enjoyed talking to the waitress so much, he said he would gladly be a member if she would help him fill out the form. She said she had no time, but he could sit down and she'd bring him a pint. He could take his time. It was an easy form.

Lohbado smiled and nodded. He sat down at a table near the back entrance, where he could smell the overflowing garbage bin and hear men talking and fighting in the washroom, plus a stream of drunken men going to piss. The women's room was on the other side of the tavern. Lohbado sat in an unpleasant spot. A man spat in the garbage can next to Lohbado's table. A guy staggered out of the pisser, blood all over his jaw. He wanted people to see the blood, a drunken trophy. He got drunk and wild and let blood congeal on his face as proof of manliness, until the waiter grabbed the man and told him to clean up or get out.

The guy went back to the toilet. Surprisingly, he didn't argue. Maybe he'd had enough violence for one night and was ready to calm down to another beer before passing out. Lohbado wished he could pass out and get some sleep. He'd been suffering from insomnia, due to big changes in his life. The part of his psyche which clung to old habits, squealed, sniveled and kicked up a fuss about having to leave things behind and to move forward into the unknown. Nobody knew how things would turn out. It could go either way. Even his buddy Joe told Lohbado to stop reacting to little things. Nobody is special. Everyone endures inconvenience, irritation and change. Stop acting like a worm.

Every few seconds somebody is breaking up with somebody, or getting fired, shot, robbed, assaulted, in an accident, or dying of sickness, old age or any one of numerous other possibilities. You're a grain of sand. Each grain of sand has life. It's a problem when one grain tries to stick out above the billions of other sand grains on the beach. Each sad grain person is going through a sand castle door in an endless sequence of before, during and after.

The waitress came back and asked him if everything was OK and if he had any difficulty filling out the form. Lohbado said the form was easy. His mind already felt buzzed under the glow of Worker Bee Lager. The waitress smiled and welcomed him to the Goo Goo Underground. She gave him a card.

"You've successfully experienced the buzz and the glow," she said, "You passed the Goo Goo Screen Test. THis place won't stand up to a cold, analytical gaze. The Bull's Blood tavern won't hold water. But if you can let go of shame and regret and surrender to the way of the bottle, you'll the experience rapturous salvation of mundane friendliness in a warm, but surprisingly unspectacular everyday fashion.
Posted by Lohbado at 9:31 PM