War of the Flies 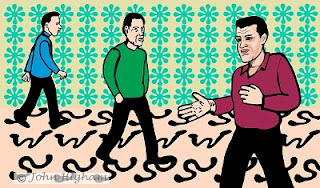 Flies, screen door, a little tear in grandmother’s screen door enabled flies to enter her house in the bush. The bush contained rock, swamp, deadfall, underbrush, spruce, fir, pine, birch, as one would expect to find in a boreal forest before the emerald ash borer bored in to lay eggs and choke trees to death.
Lohbado went to grandmother’s house in the bush to hide from enemy agents, after escaping Department of Regulation training sessions. The agent left a message saying it would be a matter of time before things caught up with him. Lohbado knew time was on his side. He had less than half a lifetime to complete. Each year meant one less year to go. The longer he avoided capture, the shorter would be the duration of imprisonment.
The agent said on the answering machine: “You better return to the department, otherwise things are going to get a whole lot worse.”
Fear tactics, malaise after the war, it was annoying. Lohbado learned to not take it personally. The War of the Flies still buzzed fresh in memory.
Lohbado first saw evidence of fly warfare when he went upstairs in grandmother’s house, which hadn’t been inhabited in three years. Ants had licked dirty dishes clean and eaten crumbs off the counter. Shiny, telltale streaks on the windowpanes revealed recent fly activity.
Lohbado checked out the three bedrooms. He didn’t want to sleep in grandmother’s bed. He chose a smaller room, where a bed was jammed against a window. Dead flies lay on the pillow and windowsill and in the space between outer and inner windows. They were old, wooden-framed windows, paint cracked and coming off at the edges. Lohbado recognized the importance of the situation, the non-accidental arrangement of bed against window and flies on the pillow. He gazed out the window, at the huge stump used as a cutting block, and at pieces of split wood strewn about and covered in moss and little mushrooms. Lohbado felt like a detective, reading signs and traces of the last inhabitants of grandmother’s house.
They found grandmother’s corpse, frozen on the kitchen floor, wooden matches spilled out, after her last attempt to fire up the cast iron stove. They took her away. Cousin Harry moved in for a while. Harry had a heart attack shortly after grandmother died and had to move out.
When Lohbado escaped from the Regulation Compound, he had enough money to buy a bus ticket. The bus driver was kind enough to drop Lohbado at the foot of a rut road. He shouldered his pack and hiked into the forest, down two ruts pressed into place by motor vehicles. Long weeds and grass grew between the tire tracks and on either side. Lots of wild flowers and bee and wasp activity, horse flies dove at Lohbado from time to time. He was careful to avoid thistles.
He stopped at a cottage along the road to speak with two men seated in lawn chairs and enjoying beer in the shade. They knew little about Harry and the house. They never heard about grandmother, which told Lohbado they were not locals. All the locals knew how grandmother froze beside the cold stove in February, a few years ago. Lohbado had a funny feeling that the men were fugitives, escaping the humorless, dull, pounding hammer of standardization that captured humans and turned them into products.
“You are the product, which you must promote, advertise and sell,” the phrase still echoed in Lohbado’s mind, after three months of Regulation Training.
“Hello, my name is Lohbado and I’m a product. Let me explain my features, how I work and what I can do for you.”
Lohbado’s main competencies or transferable skills were his ability to sleep and to support the sewage and landfill industry.
Lohbado could tell, when he stopped to chat with Tom and Dick about Harry, in front of the cottage camouflaged in the shade of spruce, fir, pine, larch and birch, those men were in hiding. They talked quietly and avoided eye contact. Perhaps enemy agents were watching from satellites.
An absurd thought, the system was imploding into fragments. Agents had no time to check out riff-raff on the periphery when so much rot was eating away at the core. The call to Lohbado was part of a routine action related to escapees or lost wanderers. If captured, they’d squash him like a bug.
One of the men sneezed and made an OOO Cha sound, a definite signal. The OOO Cha sound is sacred to Oogah and Oorsis. Lohbado put them to the test.
“Were you there when they shot Geronimo Mahlord?” he asked.
“Yes,” they replied together, “Sometimes it causes me to tremble, but yes, I was there when they shot Mahlord.”
They did the secret handshake, which I can’t describe, because it’s a secret. The secret handshake enables members of the Goo-Goo Underground, escapees of the Glass Bubble Communities, to identify each other, to separate friend from foe.
This is a long-winded, round about way of appreciating how Lohbado must have felt, after walking up the creaking, wooden stairs of grandmother’s house in the bush, to a bedroom, perhaps the same room in which his father slept as a boy and saw dead flies on the pillow, traces of recent conflict, disturbance or a cycle of nature.
Posted by Lohbado at 2:25 PM