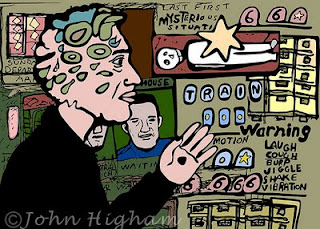 Here's how it went from a to b, a being blah, b being OK. I drew in pen a dog, doodle alphabet and words. Next, open a book. A phrase leaped off the page. Refill the cup of coffee. Presto. Blah is gone. I feel OK, until blah comes back. I'll deal with it then. Now is OK. This is a Club Morono way to get going in the morning.

Use newspaper to cover shiny, greasy table top. Spill coffee on newspaper and on notebook. I've used the automotive section of the newspaper for the past eight months, something from the past, to carry a section of newspaper dating October 18, 2010. I didn't realize until recently the value of the experiment, the aging of newspaper and the Blah to OK routine. It involves philosophy, or the nature of time and change, not to mention the religious or spiritual connotations embedded in mortality and living in the here and now. Creation out of tree fiber, news paper printed on news print, who created the news? Did God create the mediate and will God one day judge good newspapers from the bad? On judgement day, a giant bonfire will burn Blah and save OK.

Ok to heaven, Blah to hell. The value of Blah is that it serves as a backdrop to throw OK into relief (gestalt). OK/Blah/OK, Okee Dohkee, a nested chapter of the Grovelor's Group for those who define themselves differently in front of different people. I divide into infinite characters to suit the variety of situations infinitely unfolding.

Sometimes an authority stops you in your tracks and demands an answer. Who are you? What are you? Where do you come from? You're forced to reach into the swirling pot of infinite memory, situation, thought, sensation and on the spur of the moment, in as few words as possible, state the who, what when and where of why you're doing.

I was trying to pull a voodoo doll out of the candy machine at the top of the escalators in the Plaza, but the two dollar coin got stuck next to the jaw busters and small plush pets.
Posted by Lohbado at 11:28 PM