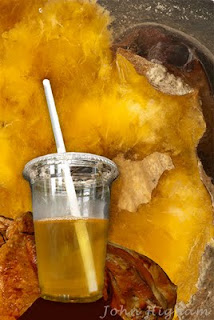 For a while, Lohbado worked in the Decoding Department for the Ministry of Regulation. His precarious career rested on one achievement: he unscrambled a Thermopolite message to the Mayor of Antz. It turned out to be an official invitation to share a liter of  apple juice.

This was the peak of Lohbado's career. Everything else he did ended up a disorganized muddle of fragments. His computer microphone picked up sputters and groans. Lohbado insisted the sounds were space-alien communiques directed to a certain Harry Brown, advising him to protect Porcupine Sanitary Tissue company from smear tactics. Politicians from the other party got at Harry Brown via the back door, implying a conflict of interest. They accused him of handing out contracts to the PST, to make them the official suppliers of hygienic tissues in government buildings.

The rest is history, the incident of peach compote, roast turkey and apple juice. Harry Brown was forced to resign from his post as Minister of Tools and Devices.
Posted by Lohbado at 11:25 AM