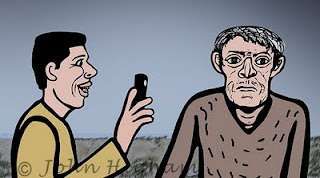 For the first few weeks after mother died, Chick ate what was left in mother’s cupboard, mostly noodles, jars of tomato sauce and cans of sardines and peas. He felt that eating mother’s stock of food would help him get over the grief; eat, glub chub yum chum slurp and then let go, phoofff.
Alone in a desolate, flat piece of land near two lakes, rocky land, where one could grow a few potatoes and carrots, Chick only went to the village about every six weeks to buy coffee. The rest of the time he spent alone, communing with nature and clucking hens.
One day, a group of youngsters, marauding, arrogant leeches from a suburb two hours south of Chick’s hen house stopped to have a look. They were on their way to a party at grandmother’s cottage, when they spotted Chick, taking a dump in a ditch. They pulled up next to the ditch, on pretext of asking directions.
Chick’s latrine was quite simple: a fallen tree bough hung over a ditch, the perfect organic toilet. Earth quickly absorbed whatever material he produced. For potty reading, Chick had a glossy magazine, with a cover story about Neanderthal man. The Neanderthal lived thousands of years ago, during the Paleolithic era, without harming the environment. Chick looked at the tall, imposing creatures, did his business and then pulled up his pants, only to see a university student filming with a cell phone camera.
The kid, Dick, was in stitches. Dan grabbed the magazine and guffawed. Chick had trouble speaking. Too much solitude, he went months without speaking a word, without even making a vocal sound.
Dick asked how to get to Boyleton. Chick opened his mouth. Words stuck in his throat. The first sound was a cluck. Sometimes Chick clucked with the chickens. He even kept eggs warm and then let them hatch in the shelter of his armpits, as he lay on his back. Chick successfully integrated into chicken world and was head rooster. Dirt got into cuts and festered into sores on his legs and buttocks.
“Haw haw haw, look at this,” howled Dan, waving the magazine, “A cave man right out of the stone age.”
Chick wasn’t the least upset by the laughter. He watched the man film and chatter to his buddy. After a few moments in front of the phone-camera, Chick coughed up a clot of mucous from his throat and began to speak. He hadn’t spoken with a person since somebody gave him a ride to town six weeks ago. After listening to so much hen cluck chatter, Chick was prepared to deal with whatever humans had to say. Dick looked no worse than the rooster, on a bad day, when he’d had enough of the hens and wanted to fly wild with the seagulls that swarmed the edge of the lake, which began at the end of Chick’s property. Chick felt sorry for Dick and his little electronic device.
“Would you like some eggs?” he asked.
That took Dick by surprise. “I wasn’t thinking about eggs,” said Dick.
“I’m not asking you to think, I’m asking you if you’d like some eggs, half a dozen, a dozen, or a two four?”
Chick launched into a long monologue about eggs and hens and the threat of bird flu and the danger of antibiotics.

Meanwhile, back in the city, a stab of pain in Morono Man’s right eye awoke him from a cat nap. Pain indicated something was not right. Morono Man opened his third eye and gazed into the Psychosphere and saw the arrogant eels tormenting a burrow man. Morono Man ran from his office, changed into his costume and took to the sky. With the speed of a housefly, he reached the roadside scene near the two huge lakes. He landed in front of Dick.
“Put away the phone,” said Morono Man, “Leave Chick alone before I turn you into a plate of salsa and scrambled eggs.”
Dick kept on recording with the phone camera, “Haw haw haw, first Hen Man, now Pajama Man.”
“Will you persist in mocking me and this man who found a nest among hens?” cried Morono Man.
“Haw haw haw,” laughed Dick and Dan.
Morono Man sucked in his breath, creating a vacuum, which forced the men back into their minivan. He sneezed. The force of sneeze shot the van down the highway and out of view.
“That’ll scare those eels. I don’t want to hurt the youngsters. But they gotta grow up and show a little respect. We’re all of Oogah’s creatures. Whoever hurts a follower of Oorsis hurts Oogah.”
Morono Man wasn't finished. He took off, with a cough, into the sky and landed in front of the van as it stopped to make a turn at Dingle Road. Dick let go of the steering wheel and got out to find out what was the problem. Morono Man coughed. Dick staggered backwards and fell against the front of the minivan. Within the space of a few seconds, Morono Man sent Dick to hell, where he had a vision of what was in store for him if he didn't change his ways.
Every day in hell, Dick would be forced to eat a plate of sour mashed potatoes and pork sausages from an infected pig. Every day, parasites would eat Dick's brain, causing him to feel bitter, resentful and horny, all at the same time. That kept his mind whirling. At night, devils would vomit into a hole in the top of his skull. Dick would be tormented with a sense of failure. People gathered around to criticize and to laugh and call him names. His hair and genitals fell off.
A deep voice said: "Beware of hell. It's no joke. Take care of your mind before it's too late."
Dick gasped in shock, rubbed his eyes and looked at Morono Man and at the dirt road and at the reeds and long grass growing in the ditch. He gazed out over the vast grey lake along the road.
"Forgive me, for I have sinned," he said.
Dick repented. He got back into the van and drove to the closest town, picked up a barbecued chicken and a six pack of beer and drove back to Chick's burrow. Chick was out cultivating the little vegetable patch of carrots and potatoes near the hen house. He didn't seem to mind the cold wind blowing off the lake. He cringed as the van drove up. Dick jumped out with beer and chicken. Chick was delighted.
"Bah bah beer! Chuh chuh chicken! Thanks!"
"I'm sorry for laughing at you," said Dick.
"I for for forgive you you you," said Chick.
Dick got back in the van and drove off with a smile. Chick sat down on a stump, opened a beer and dug in to the chicken. Morono Man flew back to Chick to make sure everything was fine. Chick invited Morono Man to pull up a stump, have a beer and peck at the chicken.
"I'm sad to say, but your heroic intervention was unnecessary," said Chick, "If Dick had stayed a little longer, I would have shown him the iPad I bought six weeks ago. I pick up a free internet signal from the other side of the lake. The quickest way to win respect is to show people your pad."
Morono Man scratched his head, "You're right Chick. Maybe I was a little hasty to get involved in something that was none of my business."
"At first, people look at me and think I'm subhuman," said Chick, "Thanks to the ipad, I feel safe. In fact, any status-brand portable electronic device will do."
"Say, you're a brainy guy, maybe you could be my sidekick?" suggested Morono Man, "People would call us, the Moronic Duo, Morono Man and Chick."
"Thanks, but I couldn't abandon the hens."
"You'll be rolling in dough. We'll buy you a state of the art chicken coop."
"OK, I'll give it a try."
And they lived happily ever after.
Posted by Lohbado at 6:14 PM