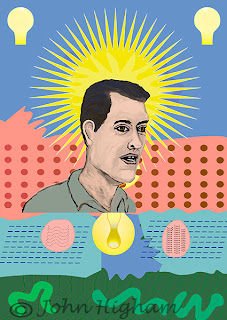 Lohbado sauntered down the street to have coffee at the nearby strip mall. The sky clouded over, a dark dome dividing the sky into light and dark, a saw tooth edge of cloud, moving fast.
Lohbado was too tired and giddy to walk faster to avoid likelihood of sudden down pour. A stab of pain stopped him in his tracks. He paused and took a couple painkillers from a jar he carried with him at all times. The side of his face and back of the neck went numb. He heard a siren in the distance. His chest hurt. Pain shot down his left arm, right to the fingertips.
Lohbado gazed up and realized he’d been struck by lightening, followed by weird rain. Sporadic, fat, sticky drops of rain oozed from a deep rust-colored cloud, a rain of nails. A few handfuls of iron nails tumbled from the rust cloud as Lohbado swallowed painkillers to ease the pain of lightning that shot from the top of his head to the tip of his fingers. A sizzling sound and melted-plastic smell created stomach nausea. He took a deep breath in order to not heave eggs and toast on to the sidewalk.
Lohbado gazed over his right shoulder as a woman, on the third floor of a bleak apartment building under the dark arc of cloud, slid back the window and lifted out a painting done on art-store canvas, a huge purple daisy on garish orange background. The woman dangled the painting out the window and reached around with her right arm and a feather duster and dusted the picture.
Lohbado noticed nearly a dozen rust clouds peeling off the menacing bruise-purple arch of cloud across the tenement building at the far end of an abandoned lot. Trees started flopping wildly. Another handful of nails struck from behind. Power-lines swung back and forth. Street lamps came on, even though it was only 10:30 AM.
A power outage put out the lights. Lumpies Donuts had a backup generator. It glowed at one end of the darkened strip mall. Lohbado laughed at the road rage of drivers in a panic to exit the parking lot and the impatient drivers forcing their way in. Of course, road rage once happened to Lohbado, a surge of irritation, suddenly out of control, flipping into a brief angry outburst of embarrassing and pointless shouting. A group of pedestrians paused in the rusty nail rain to laugh at the comedy of shouting drivers and honking gridlock at the mouth of the strip mall parking lot.
Lohbado scooped up a dozen rusty nails, which were just what he needed to hold together some planks he found on the curb last week. He pissed on the planks to kill any microscopic worms, cockroach eggs or bedbug larvae. He brought the planks inside to build shelves to house the growing stack of drawings and diagrams Lohbado had been making as part of his epic expose on the Apocalyptic War, a survivor’s account, memoir of a wandering man, a fly-like Nomrohic hero abuzz with information, of interest to no one.
He pondered the gesture of the third-story cleaning woman window purple daisy with orange painting episode. He couldn’t wait to line up to order coffee at Lumpies. Standing in line was the best part, the drama of people placing orders, a variety of human emotion, from every walk of life No need to tell you about the wheeler-dealer driver of the Jaguar and his secretary, or the angry father shouting at the waitress, who got his order wrong, as if she was personally responsible for everything that went wrong in his life. There’s certainly no need to describe the foxy woman from the beauty salon above the Chinese grocery store, or the embarrassed mother caught in the middle of texting in line as her two youngsters began crying and whacking each other with plastic, dollar store weapons. Such characters are all too familiar in the stock of, none the less true, types one will meet at any given day in line at any one of the thousands of doughnut shops or supermarkets across the country.
Lohbado stood behind a retired man, a regular recovering from open-heart surgery. They took veins from his legs and used them to re-route blood through the heart. The other day he showed Lohbado the scars.
The waitress took Lohbado’s order and then smiled as she placed the palm of her hand against his palm to give him the change. Lohbado sat down and immediately documented the lightning strike and window dusting picture episode as part of a medical or psychological description of his exposure to dangerous clouds and a mini-boom explosion on the Plains of Radiation during the Apocalyptic War.
Posted by Lohbado at 2:54 PM