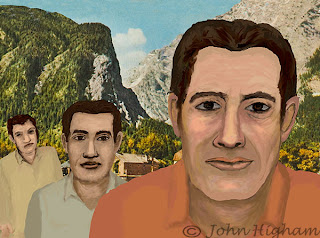 Lohbado wandered down the freeway service road. A strong, hot wind picked up dust from the sidewalk and flung it in his face, stinging the skin and getting in the eyes and nose. Paper and plastic tumbled along the curb and out into traffic. During the desolate hour, there weren’t too many vehicles racing around.
The enemy, General Arrogant Leech, would be deconstructed with the analytical gaze. Defeat him via dissection into infinitely divisible segments. Split the segments into atomic and sub-atomic particles. A lot of hot air gets released during the process. Hot air could be the solution to reliance on oil. Hot air and gases from ego-promoting discussion and digestion could be used to heat buildings and to power engines.
Deconstruction, using the OOO principles of Alphabetology would also bring about a new era of long-lasting peace and prosperity. Cha would remain as a peacekeeping army, to contain greed-driven morality and evangelizing Ooze.
After General Leech’s defeat, the Oogah cry of victory was shouted up and down the streets of Yamaville: Ooo Cha, Ooo-Ooo Cha, Ooo-Ooo, Cha and so on. Lohbado respected the big O of zero or nothing and everything and the C-cha-cha container to restrict O-O-ooze.
Viewed in this way, the Arrogant Leech lost his power. The influence of arrogance could only exist as long as he believed the worm in him needed to be expanded, or pumped up to enormous proportions in order to create shock and awe. The moment the Leech abandoned his desire to feel his power over others and to get others to agree with his opinions, the arrogance vanished in a puff of smelly hot air. The Leech could return to earthworm proportions.
Lohbado went to the temple of Oogah and Oorsis for a session of Alphabetology. The alphabet exerted a strong influence on his mind. It shaped words, sentences and paragraphs. Platitudes and self-evident truths could not exist without the alphabet. The words Oogah and Oorsis contained many letter Os, or zeroes. Oorsis rolled the Os and Oogah dug in with the letter G. They put A in the hot-seat H. A on H equals AH or HA, laugh and relief. Ah ha ha ha ha ha, ah!
Ah so, a little surprise of possibility, a glimpse of the huge space of nothing, where anything is possible. Chaos and destruction act as a catalyst. Break out of a stale egg situation. Hatch and live a new form. The pointed peak of capital A pierced the shell and joined H for hatch.
The Temple of Oogah and Oorsis existed in an abandoned warehouse set back from an intersection of freeway service roads. Lohbado took his time along the way to admire texture of weather-beaten walls and decay. He savored the roar of noise and brilliant luminance of the sky as he walked the cracked and broken sidewalk and approached the front entrance. A layer of white dust blocked the sun, diffusing the light. The toxic curtain of dust, or dangerous cloud, was a post-apocalyptic phenomenon. It would take a few generations to dispel the dangerous clouds. It took a moment for his eyes to adjust to the lesser light inside the quiet, cool room.
Lohbado climbed the stairs to the tabernacle of Oogah and Oorsis, where he would play with the alphabet. In his backpack, he carried a precious Abecedaire inherited from Grandmother Aida. The volume of alphabet games was published in 1910 and filled with decorative font and printers’ ornaments. A whimsical magic alphabet, as interpreted by Isabella Stumps, one of the first humans to discover the mysteries of Oogah and Oorsis, leapt off the page as Lohbado placed the book on a prayer table and sat down to mind his Os and Hs.
Posted by Lohbado at 6:27 PM