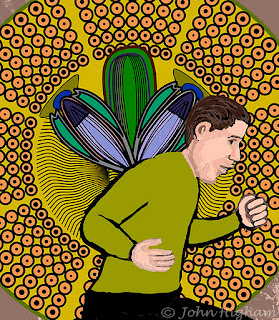 A door, reflected in Lohbado’s living room mirror, provided hope of escaping the infestation of Tunnel Bugs. A mutate strain of bugs, half tick, half roach, burrowed under the skin. The bugs secrete slippery mucus to facilitate the passage of followers.
The lead bug, or propeller bug’s, head will vibrate or oscillate in a bee-wing pattern, enabling the bug to penetrate to the layer of fat tissue. Fat tissue provides a cozy bed for colonies to propagate the species. The bugs are harmless, other than psychological discomfort and the danger of getting into the brain. They go for the right brain, causing it to swell, stimulating visual and auditory sensations. Victims of brain tunnel buggering had visions of great white light and were able to see long forgotten ancestors and to hear contradictory messages, for example:
Please forget your raincoat so you stay dry in the pouring rain.
I will go to Pastry Paradise, where people eat cake instead of bread. Proof of pastry paradise exists in the growing number of bakeries throughout the city, as wise people prepare for the Apocalypse. Holy bread, or donuts, are being sold by the dozen as followers proclaim the pleasures of Pastry Paradise. Yeast rises, oozing over the kitchen table in search of spilled milk. This became known and aggressively defended as the theology of cake/yeast triumph over broken bread and spilled milk.
You can imagine the conflict generated by this soft, puffy belief system, which in spite of being a hard pill to swallow, cried out for respect from non-believers.
In Pastry Paradise, there are no neutrons, protons or electrons, only cake, pie and croissant crumbs, falling softly like snow. All one has to do is open the mouth and be filled.
Every big thing has lesser things. For every slice of toast, there awaits a knife full of jam or peanut butter, waiting to be spread on a willing surface. Each donut is sugar crusted, frosted, dowsed or dunked in syrup, cream, foam, speckled or candy-coated, glazed with honey, cinnamon, melted butter or fruit concentrate.
Revelation occurred in a puff of cherry-flavored poof balls during the morning in which Lohbado leapt off the living room sofa, after being awakened from an elaborate dream, when the phone rang. It was Joe.
“Lohbado, look in the mirror. You’ll never guess what I saw,” cried Joe.
Half awake, confused, dazed, Lohbado reached his feet as blood left his head. The momentum, initial élan or leap ended in a big bang as Lohbado’s head hit the concrete floor covered with a thin layer of very old and damp carpet.
This merits more detailed description, a slow-motion replay. Lohbado was having a nap. Tunnel bugs tunneled a slippery mucus-lined passageway to the right brain. The phone rang.
Joe shouted about something in the mirror and that Lohbado should have a look. In his maniac zeal, Joe committed the fallacy of sympathetic magic, bridge the gap between his mirror, in the world of his apartment and Lohbado’s mirror, in the world of Lohbado’s apartment. Joe assumed that what Joe saw in Joe’s mirror in Joe’s living room could be seen in Lohbado’s mirror in Lohbado’s living room.
Or maybe Lohbado, still half asleep as he picked up the phone, didn’t hear right. Lohbado thought Joe said to look in the mirror and he would find something important. Lohbado leapt off the sofa. The transition from sleep to waking was too sudden. Blood left his head. He felt dizzy, could see stars and hear high-pitched sounds.
Lohbado took two steps and tripped over an extension cord. He fell head first on the floor. As he fell, Lohbado caught a glimpse of a luminous door reflected in the mirror, beckoning him, a light in the darkness, a pleading voice disrupting the heavy gray silence. At the same time, a propeller bug breached a membrane and bored deep into the gray labyrinth of Lohbado’s right brain, to make it easier for tunnel bugs to colonize Lohbado’s skull mansion.
The big bang of Lohbado’s head on concrete floor opened a new kind of door, similar to the door in the darkness of a dusty mirror, the Great Nomroh Door to Pastry Paradise.
May there be plenty of cake, crepe, croissants and cheezies for everyone!
Posted by Lohbado at 5:15 PM