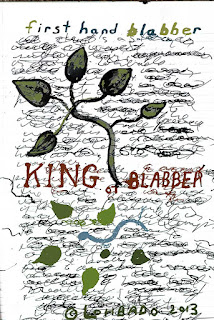 Sometimes Lohbado was seized with an irresistible urge to blabber whatever flowed through his mind, especially after drinking too much coffee. What he couldn't put into word, he turned into pictures. During such moments, he recorded his words and pictures in a notebook, in order to not torment the people around him, at least, he tried not to blabber to them too much. Notebook or blogging blabber is benign.

What exactly was Lohbado trying to say? It lay buried beneath layers of personality or self-consciousness. Maybe there was nothing there at all except noise and images. Maybe the deeper he dug into his discursive mind, the more space he would find. Who knows what's going on in the mind? Maybe nothing, except water dripping endlessly.
Posted by Lohbado at 1:25 PM