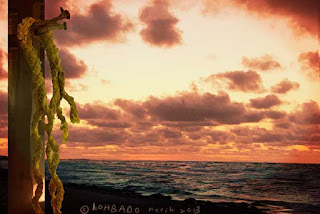 Lohbado, at the side of a desolate highway just outside a bush town overlooking a huge lake in late August, got tired of sticking out his thumb. His arm ached. He felt silly, gazing through windshields of passing motor vehicles, in attempt to make eye contact with the driver, in order to send out a message: please stop and give me a ride.

Lohbado lowered his arm, strolled over to a rock among the weeds and sat down to sort things out in his mind.

His body was going through rapid changes. One morning he woke up and could hardly move his neck and left arm. It took a while for him to realize that he wasn't young anymore.

A silver Dodge Caravan veered to a stop about twenty paces ahead, beside a guard rail. Lohbado leapt to his feet, grabbed his pack and walked to the van. At fifty-seven, his heart couldn’t handle running. Just lugging the heavy pack was about the best he could do. He slid open the side door, placed his pack on the back seat and climbed in the front seat beside the driver, a man about the same age as Lohbado, a little over weight, bald forehead and bald on top. He wore a blue nylon jacket and kaki trousers.

“You have no idea how lonely it gets out on the highway in this van,” said Hank Birch, “You give off unusual vibes, like you’re on this planet, but not of the planet. Sorry for the platitude. I don’t know how else to describe it.”

Lohbado looked at Hank Birch and realized Hank was describing himself. Of course, it could also apply to Lohbado. It was a magic moment, a meeting of kindred spirits. There was some sort of comradery going on right away. They didn’t have particularly spectacular conversation. Hank was a bit too road weary to launch into the story of his life. Lohbado was tired from being in the sunshine for the past two hours. They made idle chit chat for a while, enough to exchange itineraries. It was settled. Hank was heading to the ocean about a three or four day drive east. He would spend the night at a campground by a huge lake. Lohbado was welcome to join him for the entire ride. Lohbado agreed to pay the campground fee. After that, they didn't have much to say. They sat in silence for about an hour of easy driving, very little traffic on the winding, hilly road.

Around 4 PM Hank drove down a steep road to a campground at the edge of the lake. Lohbado helped Hank set up the picnic table with table cloth, gas stove, dishes. He filled the water containers from a nearby tap. Hank cleared a space in the back of the van. He’d removed one of the seats, to allow for a comfortable sleeping area, plenty of room for two middle-aged men. He spread out two slabs of foam and some blankets and pillows. Hank suffered aches and pains. He needed to be settled just right in order to be able to sleep.

Lohbado had a bag of already cooked chickpeas, preserved in salted plum. Hank made rice and vegetables. They drank water. Hank was a recovered alcoholic. After supper, Hank said he needed a little time alone to connect with his higher power. Lohbado wandered off to explore.

Lohbado hiked down a trail to the beach. He took off his boots and left them beside a bleached white log. He hiked along the cove, as the sun got lower in the sky. He enjoyed the various textures under his bare feet. He walked over cold sand and in cold water, through mud and bits of wood and reeds. He waded through a black soupy area. Soft mud oozed between his toes. He hiked over another sandy stretch, then across a nearly knee deep rocky stream, through some spiky grass and weeds. He climbed a granite escarpment. The lime green coin lichen against pink granite, the patches of black and ripples of quartz created a psychedelic, optical stimulation, a slight vertigo. Lohbado sat on a patch of moss at the top of the cliff and gazed out over the water, which stretched to the horizon as the sun began to go down.

The days were still pretty long. He would be able to enjoy the sun set from the cliff and to get back to the site before dark. It was about a thirty minute walk back to the log where he left his boots. Warm light flooded over the small cedar, juniper bush and red pine.  The tension left his body. It was like a muscle cramp letting go. For the first time since leaving Yamaville three days ago, he felt totally relaxed and at peace with the elements.


He would have been happy to sit there for the rest of his life. Each moment filled him with delight as the spectacular sunset unfolded in rainbow colours. As the sun touched the horizon, greenery became vivid, like the forest was made out of jewels. The sky radiated crimson and gold. After the sun was set, he slowly got up, climbed down the escarpment and retraced his steps. The campground was deserted. The season was pretty much over, in that northern region. They’d been lucky enough to arrive on the first nice day after a week of stormy weather. The storm wiped out the flies. When Lohbado got back to where he left his boots, there was still enough light. He sat on the log, feet crossed on the sand and gazed across the water to the brightest point of light on the horizon, where the sun had gone down.

At that moment, Lohbado felt capable of dealing with just about anything. He’d been through a lot of ups and downs, times of panic and trauma, good times, euphoria, and boredom. Memories floated through his mind. His life had been pretty ordinary, no unusual adventures. He had no enemies. Nobody was angry with him anymore. He wasn’t on anybody’s mind.

He wanted to dissolve into that peaceful moment, into the pale gold and pink sky, into the vast water, into rock, sand, trees, dissolve, nothing left, no more mind, no more thinking, no more hope, no more fear. Let it all go.

Hank all of a sudden came hollering down the trail from the campsite to the beach.


“Where were you?” he asked in an angry tone.
“I told you I was going for a walk,” said Lohbado.
“You’ve been gone for over two hours! I was worried something happened to you.”
“But after supper, you said you wanted to be with your higher power.”
“I meant like fifteen minutes, not two hours.”


A wave of irritation, Lohbado felt anger rising. If Hank was going to be that way, Lohbado would take his pack from the camper and spend the night under a juniper bush. He didn’t have to explain himself to Hank, or to anyone. He took a deep breath, gazed at the water, while Hank stood fuming beside him.

“Sit down,” said Lohbado, at last.
Hank sighed and sat down on the log next to Lohbado. As the sky darkened, Hank told Lohbado how he lost his job, how his marriage of thirty years came to an end, how his son had no time for him. It sounded a lot like his own story.


Even though the house by the ocean, which had belonged to his father, was no longer habitable, Hank planned to spend the winter there. The place smelled of rotting material. It was beyond repair, but would be a fine shelter for the winter. If he wanted to live by the ocean a long time, he would have to tear the house down and build another. He thought of doing that. Tear down the house and buy a small, prefab unit. He had enough money for that. It would be slightly better than living in a trailer home.


Lohbado said sure, it sounded fine. He would spend the winter in the company of Hank Birch at the dilapidated house by the ocean.
Posted by Lohbado at 12:27 PM