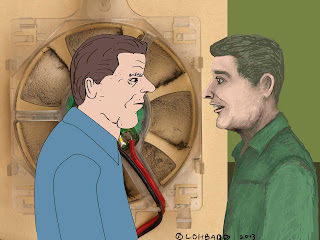 The boss looked at Lohbado. The boss had few interests other than to get what he wanted. He loved feeling power. It compensated for the lack of passion in his life. In revenge against those who enjoyed life, he could impose regulation. He took pleasure in creating stress and disappointment among his underlings.

Lohbado once overheard him say to another director, as they paused before entering a conference room, “It’s good for people to be disappointed. That way they learn.”

Lohbado wondered what they learned. He learned that the boss was an asshole. The dull eyes of his boss sent shivers through Lohbado. Looking into the boss’s eyes was like opening the door to a storage room, the walls lined with metal shelves and lit from florescent tubes in a drop tile ceiling, a bleak and limited world, no room for imagination or innovation. Things had to be a certain way. He would not tolerate discussion. Questions made him angry. There was nothing to do but listen. The boss would talk, then go away.

Lohbado knew his days at the department of Standardization were numbered. He failed to obtain the latest certification. Instead of taking a mind-numbing departmental course during annual vacation, Lohbado went to the ocean and relaxed.

When he got back, the boss was not happy. Before even greeting him, without even a hello, the boss said in a low monotone: “I see you didn’t take the Cells Data Sampling Course. I checked the enrolment. Your name wasn’t on the list. The Minister of Standardization requires that all Push Button Experts take that course.”

Then he walked away. That’s how he was, dull, limited and discouraging. Bob warned Lohbado to take a good look at the boss, because the boss was about the biggest asshole you’re likely to ever meet. The previous boss would expect each worker to take a holiday. He knew how to do the paper work, so the upper administration was none the wiser. The department was reasonably fine until Stan Kruckly replaced him. Stan took everything seriously. He applied the letter of the law. He believed in the glory of regulation.

At the end of the day, the boss, accompanied by the director of another department plus a security guard approached Lohbado’s cubicle and told him to take his personal belongings, that he would not be coming back. His job was terminated. Lohbado nearly fell over backwards. A rush of grey spun before his eyes. He gasped. His throat tightened.

“That’s right,” said the boss, after the initial shock sunk in, “Your position has been cut. We’re down-sizing in order to increase share holder value. Five positions are on the block. You’re one of them.”

It took about six months before Lohbado recovered from the shock and woke up to the fact that he was truly unemployed. In order to receive a pension, he had to take a job training course at Pimplebee College. More bullshit.

He sent out a hundred CVs. A year later, he still was without a job. They told him it was all his fault. He should try harder. He should think positive. Don’t give up. You’re never too young to start again. Sometimes you have to do things that are unpleasant. Nobody is special. He frequently heard the story of a hundred year old man who took a job training course and became a data entry clerk. If a hundred year old man could enter data into a computer, then there was no excuse for Lohbado being unemployed.  Lohbado could create his own job, like the woman who became wealthy selling needlepoint bathroom decorations.

Meanwhile, more jobs were being cut than created. It was a painful situation, being told to get a job when there were no jobs to be had. It was part of austerity. Cut all programs. Cut jobs, then tell people to get a job. Tell them they’re lazy. The deficit is all their fault. The unemployed and low income people will be severely punished...
Posted by Lohbado at 1:31 AM