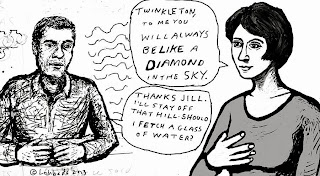 Ok, here's a preview to upcoming Club Morono comics which will be available at Expozine:

Jack Twinkelton's major mistake lay in his wanting to be a star. After a quick rise to fame, he failed to jump over the moon. All the Queen’s kittens and all the King’s dogs, failed to put Twinkleton together again. His like status went way down. His videos failed to grow viral. Jill Hubbard, after putting a bone in the cupboard, said he would always be her little star, up above the world, so high.