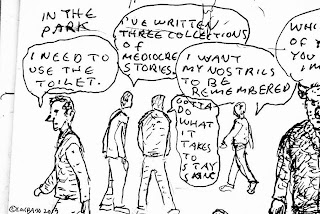 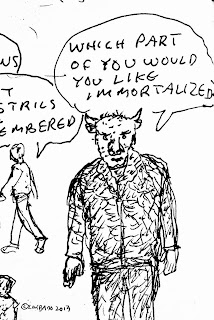 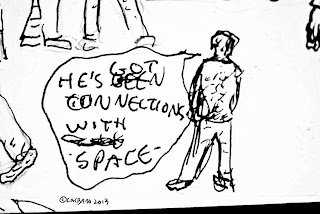 Another episode from Lohbado’s whimsical memoirs, the story of zero and oh, things and nothing, boundary and space...

Over breakfast, Lohbado read a little Negative Dialectics. He read a passage which explained how in order to attack, consume or destroy someone, the aggressor turns the victim into a monster. To view the person as being inferior or subhuman makes it easier for the aggressor to hurt the target of his or her selfish hunger and aggression. The attacker flies into a rage. Rage is used to justify attack.

Here’s the aggressor’s logic: “Because I’m angry, I have the right to hurt you. You deserve to be hurt because you make me angry. After, when I regret having lashed out in violence, I feel angry at you for having made me hurt you. Your pain reminds me of what I did to you. You could at least hide the damage and conceal the pain. I don’t want to hear about it.”

The aggressor feels that anything which lies outside his or her sphere of self-interest is inferior or suspicious.

Lohbado closed the book by Adorno in order to rest his eyes. He poured another cup of coffee. He planned to spend the day studying and contemplating the Book of Oogah. First he had to shake off morning grogginess. He rubbed his eyes and gazed about his tiny, crowded kitchen. He jumped up and stamped his feet on the concrete floor. He lived in the basement, so his stomp dance would bother nobody.

Lohbado began to relax. There’s nothing like a little song and dance to loosen the limbs and enliven the spirits. He planned to work on a diagram and some drawings. There’s often a bit of creative block, which has to be melted. His body offered resistance in the form of aches and pains. His mind cranked out discouraging messages, such as, why bother? It’s a waste of time.

Lohbado maintained discipline. Discipline enabled him to overcome resistance. Don’t worry about what people think. Don’t try to impress anybody. Proceed with pure motives and nobody will be able to stop you. Pure motives means being able to act outside the limitations of ego. It means overcoming the inhibition or neurotic habits of one’s personality. When one is free from self-based motivation, curiosity and imagination can create and explore. Lohbado found it helpful to mutter a few platitudes of encouragement to himself. Pick up the pencil and draw. Don’t think too much. Sit up straight. Pay attention.

Lohbado daydreamed a moment about an episode that happened five years ago, when he visited the village of Granite in the Almighty Mountain Range at the edge of the interior.

Lohbado spent six months in the village of Granite, until spring filled him with the urge to hike through the mountains in order to see what was on the other side. Joe and some of the people in the Mouldy Hotel told Lohbado it was not a good idea to hike through those mountains. One could easily drive, catch a train, or small plane and arrive safely at one’s destination. Lohbado wanted to go on foot. He invited his critics to join him. They were too busy, or didn’t feel like it. It’s an exhausting trail. They felt Lohbado was showing off, trying to get attention and being unreasonable for wanting to hike to the next valley.

The reasonable thing would be to stay close to the familiar. Don’t rock the boat. Don’t do too much. See what others are doing and do the same. If others like to hang out, then why bother going off to explore? Why not hang out and do nothing?

Lohbado saw how one gets rewarded for doing nothing and punished for making an effort. The solution: forget about yourself. Drop Lohbado. Drop trying to be anything. Just do whatever you’re doing. Ask all the questions you like. Don’t be intimidated. The reward of effort is increased joy of life. The earth will always support you. The sky will never turn away. There will always be animals and vegetation to keep you company.

Lohbado dropped his pencil, sighed, then picked it up and continued drawing, for no other reason than the fact that he happened to enjoy drawing.
Posted by Lohbado at 8:18 AM