city of the dead 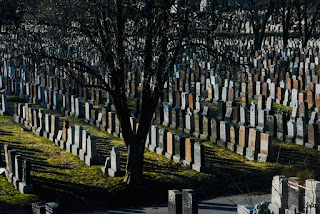 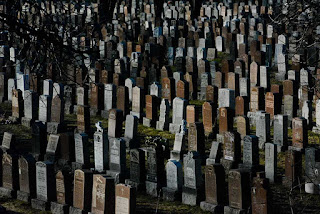 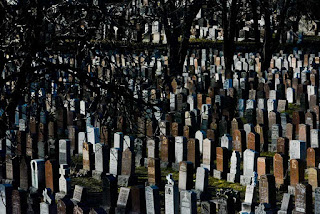 Lohbado turned off the land of the living into the city of the dead. Dead of winter, rite of spring, Lohbado's bicycle took him into the largest cemetery in Montreal, Notre-Dame-des-Neiges. Lohbado sat on a bench and scratched his head as he gazed out over a sea of tombstones commemorating individuals who lived, had a lot of ideas, opinions, beliefs and emotions then died.

The Moronovian question: what is going on? ended in silence. Silence is not something to write home about. It's no reason for self-congratulation. Emptiness offers no peg on which to hang one's hat. It's more like standing at the edge of the ocean and gazing into the infinite. Haze sometimes makes it difficult to distinguish where ocean ends and sky begins.
Posted by Lohbado at 1:03 PM