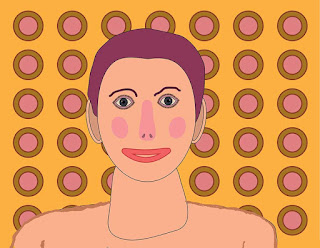 Lohbado worked for ten years as a PBE (push button expert) in the Cha Region of the Poh Valley, after the Apocalyptic War which was supposed to wipe out life as we know it in order to initiate a cosmic fantasy of a new godly kingdom on earth. Kill the here and now in order to obtain something better later. It didn't work out according to fantasy. The consequences were disastrous. In the chaos, Lohbado found work in an outlying area on the Plains of Radiation.

He had a booth with a PBC (push button console). The console was a mechanical device to organize sense data into representations of a world. From material data, new structures were created. Lohbado did mostly data entry and calculation. It required an ability to manipulate algorithms. The console accepted a type of data congenial to processing. This limited the resulting models of existence.
Posted by Lohbado at 9:57 AM