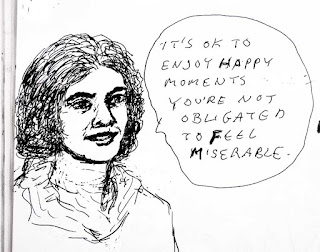 After more than 60 winters, Lobhado knew what to expect. First phase of winter is the lead up to December holiday season, lots of festive gatherings and good cheer. January the super cold hits, if you live in a city like Montreal. February the sun starts to move higher in the sky. It's not quite so dark. There's a glimmer of hope, but continual frustration with each major dump of snow. Then March comes and one is totally fed up, irritated, close to breaking point. Spring usually arrives in April.

While in the middle of feeling grumpy about more snow and more cold, Lohbado noticed two new shoots on the amaryllis plant, which flowered, then wilted. That made him happy right away, the beautiful green of fresh leaves. Then he felt the familiar knot of anxiety in his stomach, which he often felt during moments of happiness, as if to say, you're not supposed to be happy. Maybe it's related to some sort of religious hangover, from being the son of a preacher man. Lohbado did the above drawings to teach himself that it's ok to enjoy flickers of happiness when they occur. One is not obligated to feel miserable.
Posted by Lohbado at 1:26 PM