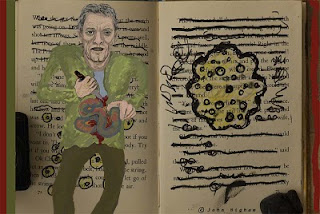 The characters on this site are imaginary. It's not autobiographical and resembles nobody. However, they are valuable stories in the struggle of good to overcome evil. Maybe this story is too shocking and you should read no further. The story underlines the importance of good and the futility of bad.
To make a long story short, Lohbado's grandfather, the Reverend Woodlot Stumps, disemboweled himself one night in 1969 and died. Lohbado was thirteen at the time and witnessed the violent death.
Woodlot used various terms to describe the room where he wrote sermons and treatises on morality and theology. One night, when he was about sixty, Woodlot realized it was nonsense. Lohbado, who happened to be in an adjoining room, heard cursing and swearing from Woodlot's office, study, bureau, library, the room where Woodlot would shut himself away for hours, reading and writing. Lohbado ran to Woodlot as his grandfather paced wildly back and forth. The old man kicked a chair and threw a figure of the Virgin Mary on the wooden floor. It broke into three pieces.
"Woof, woof!" shouted grandfather, when he saw the boy, "That's what it is, nothing but dogma, fit for the dogs. Spell dog backwards. Woof!"
His words engraved in Lohbado's memory, were not understood at the time. Years later, after experiencing the way of the world, after losing illusions, experiencing disappointment and going through various ups and downs, Lohbado began to have an idea of what grandfather was trying to say. It dawned on Lohbado one day that his father's words were a testament, a transmission of secret wisdom, the revelations of Isabella Stumps. They were kept secret so as not to be destroyed, distorted or misunderstood. The ideas weren't original. Woodlot's harangue sounded like a pastiche or melange of ideas from the various books in his library. No need to drop names. Any scholar will recognize where he got the ideas.
The testament of Woodlot, however, was little more than a collection of ideas. The concepts were merely there to provide structure for something more essential, which could not be put into words. Even at the age of thirteen, Lohbado understood what Woodlot was driving at, even though the ideas themselves were too abstract for him to follow. He had some inkling, which years later, began to make sense. At the time, Lohbado nearly went insane from the trauma of witnessing something so intensely irresponsible.
"For years I sat on the front steps like Old Lady Boodlekins, trying to hold the shit in," said Rev. Woodlot Stumps, "I had visions of great great grandmother. And let me tell you, the great great grandmother spirit doesn't lie. She's not fooled by the icing on the cake, or the sophisticated glitter of big words, fancy clothes or charm. She won't be deceived with hollow promises. She knows how it's popular to say you're going to do something and then to not do it, to experience the gratification of seing how easy it is to disappoint someone, to build somebody up only to tear him or her down."
Lohbado had no idea what he was talking about. He was obviously raving about some sort of personal injury, hurt feelings or wounded vanity. However, it almost sounded comical, as if Woodlot was telling a joke. Lohbado kept expecting to hear a punch line.
Woodlot said: "What I'm about to do is wrong. It's foolish, but I'm going ahead with it anyway. Don't ever do what I'm about to do."
Woodlot plunged a knife into his navel, dragged the blade upwards, until intestines spilled out on to the floor. The shock of hari kari produced an instant heart-attack. Woodlot fell dead to the floor, in a pool of blood and guts.
It was a shocking moment of intimacy, to see a grotesque pudding belly and then a knife going in.  Lohbado's sense of reality to fragmented. For a few days, his sense of normality was suspended. The world appeared absurd. Nothing made any sense. The old man had represented law, order and stability. To break the law, to behave in such a disorderly matter and to commit suicide was a giant betrayal of trust. Lohbado looked up to his grandfather and aspired to be like him. After such a horrific act of violence, Lohbado no longer knew where to look.
Posted by Lohbado at 4:10 PM