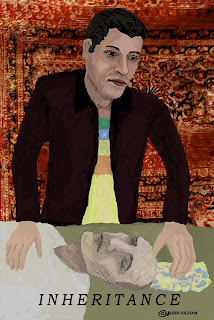 What did Lohbado get when the old man died? Gold oozed from the dead man's head. Lohbado's eyes glazed over. He gazed into the distance and dreamed golden opportunity. Heroically, he would keep going and not collapse in sorrow. It was hard not to shed a tear to witness such strength. In that moment, Lohbado was a good example to us all.


What's he going to do with all that money? Traditionally, misers would hide it. Some people even covered it in manure. Excrement and gold go together like bread and butter. The modern miser spends money on him or herself, or invests it in stocks or real estate. I'm no expert. The old man will be quickly forgotten, while Lohbado enjoys the inheritance.

After the body turns into a corpse, it will be as though the old man had never existed. He will exist as a few fragments of distorted, fading memories in the minds of a handful of people. Billions of people come and go through the gates of life and death. Each person might feel he or she is the center of the universe, that his or her existence is more important than the existence of the other two or three billion inhabitants of planet earth. What a joke! The body becomes a corpse. Mind dissolves. What happens after that, your guess is as good as mine. I don't really care. I'm more interested in finding out what's going on in the land of the living than in speculating about what may or may not happen when death occurs.

The beauty of death is that once dead, one no longer has to earn a living. Although, in a few rare cases, some people do find jobs they enjoy, for the majority, work is not fun. That's why lottery tickets are so popular. Win the lottery and you never have to work again. Death certainly does appear attractive. However, one has no control over such matters. Death happens without warning and could take place any time.

Meanwhile, what's Lohbado going to do with all that money? However, first things have to be settled with lawyers. It won't go smoothly. Stonehenge remarried after Lohbado's mother died. That throws a monkey wrench into things, opening up a real can of worms, each worm demanding a piece of the pie and insisting that the other worms be excluded. Even the old man's wife is threatening to call the dowager's clause to make sure the children inherit as little as possible. Lohbado will be lucky if he inherits enough to pay off a few small debts. He wasn't born into a wealthy family.

Lohbado imagines gold oozing from the dead man's head. However, he has no illusions. He's not attached to money or things. Greed is a sure recipe for misery. Look at the corpse. What's going on?
Posted by Lohbado at 11:43 PM