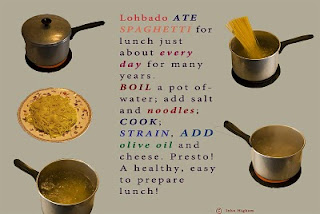 Simplify everyday life, so that one day resembles, as much as possible, another. The sheer pressure of routine caused Lohbado's mind to dream, over spaghetti lunch, of Steve Wormsly's progress up Mount Venus in the fertile Cha region of the moist Po Valley.
Lohbado scaled the grassy slopes of the hill, or small mountain, and reached the rocky summit. Overjoyed at the view of endless sand dunes, stretching around the circular horizon he stood in awe, taking in vivid details of sight and sound. He saw the name Steve Wormsly scratched into a slab, part of a pile of rock, an early shrine to Oogah, an anthropomorphic representative of God. Steve piled rocks into a shrine during the height of his progress, back through the golden age, where he hoped to discover the promised land of bread and beer.
Lohbado staggered, breathless, in the cool air of high altitude. He fell to his knees in front of the altar to Oogah and Oorsis. He pressed his forehead to a flat, lichen covered piece of rock beside the rock where Steve had carved his name. Lohbado listened to the force of nature's wind break against the mound and hoped to find some answer blowing around. Maybe Oogah or Oorsis might break news in warm gusts of glad tidings.
The strong wind stopped after Lohbado circumnabulated the stone shrine three times. The wind stopped like a sudden pause before a sneeze. Lohbado felt it coming, first a thin thread of incense and then golden, sticky fluid oozing out of the rock. He stuck in his thumb and tasted the honey. The moment his honeyed thumb touched his tongue, a swarm of bees rushed at him. First they pelted his skull like hail. Then they passed through the walls of the brain mansion. Bees passed through skin and bone, deep into gray matter and mixed honey into dopamine and tickled synap gaps, causing neurons to misfire.
Lohbado fell to the ground in a state of rapture, an incredible sweetness of being. He experienced the primal force of nature surging through his body. He trembled as wept as he realized universal notion within individual determinatedness. It was similar to the experience Isabella Stumps described, during the late eighteenth century, in her Tigerlily Prophesies, where she predicted a man, similar to the lilies of the fields, would dress up like a king and mount Mount Venus. Lohbado felt he was living out a variety of religious experience, to the full, at the peak of spirituality. If this continued, Lohbado might one day become a holy man, ejaculating wisdom into ears of followers suffering from confusion and low-self esteem, and ready to believe anything that offered pleasure or power and denied pain.
Lohbado reached for his cell  phone to call Lohbada, but the cell phone battery died when Lohbada picked answered. He wasn't able to tell her about the hill sacred to Venus, or the rock shrine of Steve Wormsly, where he experienced the secrets of Isabella and the mysteries of field lilies. How was Lohbado to describe to Lohbada the mystic rapture, or state of oneness with the universe? The battery died and then the spiritual joy ended as quickly as it started. The wine of gladness turned to the vinegar of disappointment and hunger for it to happen again. Lohbado's mind crashed from the hill of joy to the valley of the shadow of death. God withdrew his comforting rod and staff. His cup was dry.
God broke wind again, causing sand to fly into Lohbado's face, stinging his eyes. Lohbado crouched down as wind pelted him with sand. Lohbado was sorry. He had sinned. It's a sin so speak of the mysteries. If people began describing the mysteries, they would no longer be mysterious. The left hand must not know about the goings on of the right hand. Lohbado had committed a sin of pride.
He fell down into darkness and woke up in the valley, Satan bending over him, a hairy mongrel, phantasmagoric conglomeration of dark powers of existence, clothed in the many shapes of reality, goat, pig, cat, dog characteristics combined with human sophistication, self-serving logic and aggression. Lohbado saw the ghost of Rev. B. Goat, who had gone straight to hell after robbing the Church of the Living Water's Tabernacle treasury, after killing a boy during a botched exorcism. Rev. B. Goat, an emanation of Satan, rubbed ointment, made from a multiplicity of plant forms collected in a hostile brew,  on Lohbado's forehead. The ogre demon of swollen ego smothered under a preparation of healing cream, this is the meaning of ointment, to assuage, or placate sensitive, inflamed tissue, worn from years of attempting to rid the bodily temple of ingested digested material.
Posted by Lohbado at 6:53 PM