Halfway through this life, O! 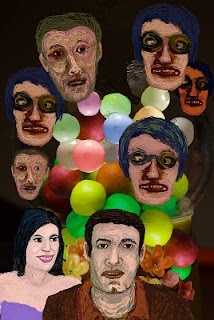 Half way through this life, half way through a cup of coffee, did you hear the divine comedy in the brief silent holes in the wall of noise early Sunday morning at the corner cafe? The above picture is, like everything on this blog, a work in progress. Competed half way, thoughts and images, manifestation of something or other...
Half way around Gaspe Peninsula I paused to admire the famous Perce Rock. The museums were closed during winter. I was the only tourist. Jaques Cartier sailed past the rock, up the river to Quebec and Hochelega, now known as Montreal. He called the new land Canada.
Half way through Old Quebec, I realized it's time to stop hoping for time later down the road. The road could end abruptly. I saw smashed trucks that slid off the icy highway. Take stock, or inventory of the situation right now, or if that is too bleak and discouraging, have fun looking for the essence of life. There's no wrath to flee from other than the wrath in my mind. No end of the world, no big struggle between good and evil, other than various degrees of clarity or obscurity in my mind. Maybe the beginning never happened. Known reality exists within brackets of the knowable. Reason could reason within the limit of reason. Anything beyond that could be fantasy, or speculation. Some people claim to have divine revelation. Whatever manifestation occurs in the form of word or sensation is limited by the nature of being a manifestation.
As I pondered the mystery of being, while gazing at the famous rock, in the pink light of sunset over the St. Lawerence River, I saw light streaming through the O shaped hole. From the hole, hundreds of little Os poured out, like dust motes in a sunbeam. Up to this point, I had been mostly occupied with the letter A, when suddenly the letter O rushed on scene, like tiny flying saucers. I stood there, mouth open, in awe and exclaimed: Oh!
The letter O has a shape similar to the nostrils of Oogah and Oorsis, the anthropomorphic representatives of God and creators of the universe. Through the O nostril holes they breathed infinite letter Os. Letter Os went in and out of their nostrils, in many colors, a whole spectrum of tiny Os, like Cherrios. Oh ho ho ho! Oh boy o boy o boy!
The O shaped hole in Perce rock cloned a row of O holes, just above water line. No less than five luminous Os appeared horizontally along the rock, each O emanating hundreds of Os, Os within Os. Within the Os, I noticed tiny animals. A hungry hopping rabbit, two monkeys picking and eating fleas off each other, a donkey pulling a heavy load and pausing stubbornly to bray about being forced to carry or pull a burden, a lion growling to clear mucous from the throat, a laughing hyena, a zebra disguising itself in the shade: hopping, braying, picking, eating, growling, laughing animals appeared in the letter Os.
OOOOOOOOOOOOOOOOOOOOOOOOOOOOOOOOOOOOOOOOOOOOOOOOOOOOO
Posted by Lohbado at 9:00 AM