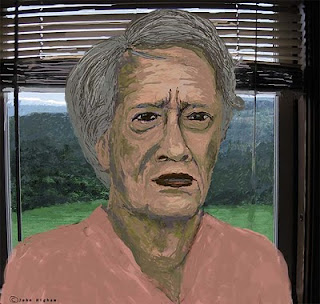 The spirit of Grandmother, in her pink gown, appeared in the window after Lohbado forced his way into the abandoned house, overlooking a lake in the bush. He hurried upstairs to a bedroom, the beds made up and dead flies on the pillow.

Flies trapped between windowpanes, died on the sill. Some crawled through holes and made it to the white pillow soiled with yellow stains from head sweat and grease.
Lohbado gazed out the window and grandmother appeared, telling him that he would find a bottle of wine, not yet vinegar, in the kitchen closet downstairs. He should uncork the red wine and pour it over a rock in the lake to appease restless spirits.
Lohbado went down to the kitchen and flipped a breaker. A forty-watt bulb provided a halo of light in the gloomy kitchen. After banging around, opening doors, and hitting his head against a shelf, Lohbado finally found the bottle of red wine in a pale green pantry. He opened it with the corkscrew from one of the drawers under the counter. A spider, in the pile of birch bark chunks beside the woodstove, ran for shelter. A black crust of dried coffee coated the bottom of a mug left on the counter beside a plate smeared in dried egg yolk. Ants had cleared away the toast crumbs. Lohbado sat down a moment, on a spindly green wooden chair and breathed in the cool, damp, musty air.
He poured a glass of wine and held it to the lightbulb. It appeared opague, caput mortem and gave off a strong smell. It burned the back of his throat and tasted sour. Grandmother told him to open the bottle. Mondo morono Lohbado Magnifico! She didn't exactly tell him to drink. But it only seemed right to have a sip of what he would be offering to spirits down at the lake. He nearly gagged on the vinegar wine. Lohbado corked the bottle and hurried out the screen door.
He wandered a steep path through trees clinging to rock down to the lake, to where flat rock gleamed in the evening sun. He waded to the rock and knelt down. Wine gurgled out of the bottle and splashed like blood into the water. A strong wind blew the surface of the lake into little waves. Pine, spruce, fir and birch trees swayed back and forth.
As he gazed into the water, he had a vision of his father, in the form of a buffalo, a hunched back, galloping across barren northern hills, along a wide, silvery river. The spirit ran to an abandoned 1967 Chevrolet Biscayne. The buffalo turned back into the shape of a middle-aged man in a black suit and black hat. He got into the navy blue car and then dissolved. A dark cloud blocked out the sun. A fork of lightening shivered through the air, with a sizzling sound and blinding light, followed by a deafening thunder clap. Huge drops of rain poured down.
Lohbado ran back to the house, but found the door locked, which was strange. None of the doors had been locked when he first arrived at the house. Weird things were happening. The storm wasn't behaving like a normal storm. The trees, flopping back and forth, sounded like voices, murmuring. He was afraid to listen to what they were talking about. Another shaft of lightening split a white pine down the middle.

Lohbado pried open a window and climbed in. He heard grandmother, but couldn't see her anymore. She laughed quietly, and then whispered appreciation for him having done the libation. Lohbado was a good boy. He did as instructued. Grandmother was free, at last. She was free to dissolve, freed from the prison of that house where her spirit had been trapped, ever since she died twenty-years ago of a heart attack. They found her frozen, two weeks later, on the kitchen floor, during the month of March. Grandmother was pleased that Lohbado's father appeared in the form of a buffalo when Lohbado poured wine into the lake. After years of refusing to so much as touch a glass of wine, the Reverend Stonehenge Stumps had accepted the offering of wine and then returned to his place of peace amoung the animals.
Lohbado cried out for grandmother to stay and explain what it meant. The rain stopped. He stood in the doorway. A rainbow arched across the sky. He felt calm and serene waves and knew that something significant had happened.
Posted by Lohbado at 8:28 PM