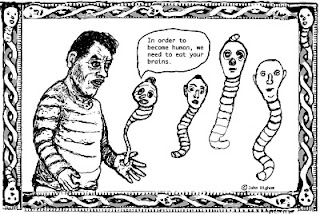 Funky weather, hot one day, cold the next, turbulent arrival of spring made people vulnerable to sore throats, runny noses, a whole world of viral activity, microscopic worms and organisms, dressed in protein jackets and layers of fat.

Like any living creature, micro-organisms want to live and self-replicate. They attach themselves to a host and leech nutrients or whatever fulfills the organism's needs.

Here's a fragment from a text I wrote for tonight's Harvey Christ Radio Hour on McGill Radio, CKUT FM:


Microscopic creatures sinned by creating pain in the throat of an old man.
However, the old man made a virtue out of necessity and turned sin into virtue, or pain into pleasure. Pain was a pleasure in so far as it indicated that something was not right inside his throat. Without pain, the old man would have continued happily on his way, as worms wreaked havoc in his throat. Ignoring parasitic activity could have shortened or ended the old man's life. Pain caused him to seek medical help.
Viral activity went to the brain, twisting his ability to get a sentence straight. The sentences began to twist like snakes, a favorite form of Satan. Satan snaked his way through the blood stream, upsetting white and red corpuscles, causing the old man to cough up blood.
Satan prepared mucous blood cakes in foam sauce, sending the old man into spasms of coughing. Cough it up. Cough up your sins. You committed the sin of hosting alien creatures from a viral galaxy in moist regions of the cosmos.
Moist, menacing micro-organisms, troops of Satan, go back into the hole under that rock over there. In the name of Florence Nightingale, I command you to make yourself scarce, before we call in the antibiotics of good.
Take off that protein coat. Remove that layer of fat. I command all poisonous, noxious substances to leave the throat of the old man in peace. Allow him to return to his habitual state of calm and serene waves. Why do you disturb the last days of a peaceful old man? Your behavior is sinful!
We will not tolerate sin! Jumping jean vagrants, mobile, transposon, viroids, take your naked plasmid cakes and leave! Sputnik, prion, bovine spongiform encephalopathy, kuru, Creutzfeldt-Jacobs Disease. I hereby break the chain of self-replicating molecules. Rickettsia, Chlamydia, viral self-assembly, autonomous growth of crystals, inherited genetic mutations, I command you to stop your mockery of human existence and to go back into the ground where you can feast on each other, until you realize the futility of sin and arise as healing white blood cells to aid in the battle against harmful organisms. Go into that membrane envelope of endoplasmic reticulum and cease your infectious behavior.
In the name of anti-viral medication, cease and desist forthwith! Rise up, restriction endonucleases and cut up the viral DNA, which bacteriophages inject into bacterial cells.
I have spoken the name of sin. You know who you are. You cannot hide from the eye of virtue, you sinful Sulfobales and Thermoproteales!
Posted by Lohbado at 8:29 PM