Worm in the Hand 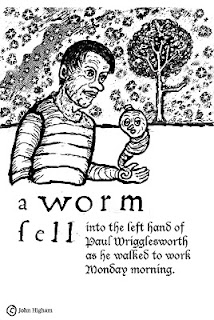 A worm in the hand is worth two in the bush, thought Paul Wrigglesworth after a worm fell into his hand as he walked to work Monday morning.

Worms fell out of trees. Worm clouds rained worms. Plants exuded  wriggling parasites during the worm pandemic that broke out in an Oo community located in the Cha Region of the Poh Valley. Lohbado phoned Paul to warn him to bring an umbrella. Paul thought Lohbado was joking.

The worm gazed into Paul's eyes and declared his purpose: to become human. Worms aimed to infiltrate brains, to feast on gray matter and then to slide out, in mucus-coated cocoons, through human nostrils. After a gestation of two weeks, humans would emerge from the cocoons. The worms didn't care about the cost of human life. It was every worm for itself, eat or be eaten.

Worms were tired of being trodden under foot. Worms no longer wished to feast on garbage, fecal matter and carrion. Worms wanted to sit at the table and partake of proper fare.

At first, Lohbado and Paul didn't take it seriously. It felt too surreal to be true. They thought maybe it was a dream. Sometimes people have been known to share dreams, or to wander into a collective hallucination, which could wreak havoc with one's sense of reality. One could lose track of up and down.
Posted by Lohbado at 11:54 AM