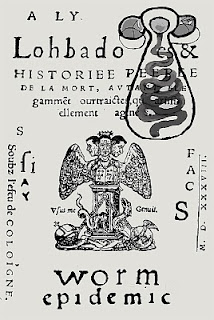 Image from a worm work in progress. I find it helpful to post unfinished work, as an indication of what lies down the road. Stay tuned for the adventures of Dr. Jane Wormsly and her struggle with the Worms and the Arrogant Leech.

It will be published as a black and white zine, using a template from i-Work, a foolproof method of layout. Meanwhile, keep checking Morono for worm epidemic updates.

Worm clouds rained worms. Worms crawled out of a pillow, damp with sweat, last night and inspired me to offer this preview. Worms led my mind into temptation, through long tunnels into sticky gumbo under front lawns and city streets.

Worms communicate using worm-music, a kind of mucus-slobbery-slittery-swallowing a lump in the throat kind of sound, or like the sound of an adolescent chewing a piece of wonder bread with his mouth open. Chewing chew rhythm underlay squeezy, oozy, expanding, contracting, elated and then falling into doldrums kind of melody. The rising notes of joy and good news were separated with deadpan falling chords of despair, but not too much. It would be terrible to alienate the listener with whiny dissonance.

Underground worm music communication was only one aspect brought to light as Dr. Jane Wormsly examined dirt under her nails, after digging through flower pots to determine the extent of worm invasion. Dr. Jane looked into the possibility of finding an organism capable of seeking out and destroying enemy worms.
Posted by Lohbado at 6:41 PM