The Angel and the Devil 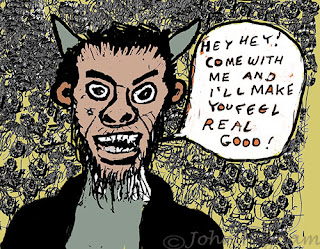 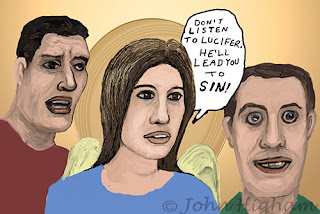 “Lohbado, you have now been liberated from all responsibilities,” said George Potz, Regional Administrator for the Department of Standardization, “Your services are no longer necessary. You are free to go. You will receive a small veteran’s pension, barely enough to keep you alive.”
The administrator asked Lohbado to sign a statement saying he was pleased with the Department of Standardization and that he would never say a bad word about anyone. In return, he would receive a minimal veteran’s pension.
Lohbado had nothing bad to say about anyone. There was no need for him to sign the statement. He wasn’t about to broadcast his wounded condition. Like most inhabitants of the Dome, Lohbado had suffered brain damage. He would conceal his malaise, in status-conscious society, in order to appear respectable. He was a veteran of the Secret Desert. People could relate to the fact that Lohbado worked in the Cha Region of the Poh Valley. Their main concern was to find out his level of financial wellbeing, in order to decide if he was worth talking to, or if he should be insulted and spurned. Lohbado’s small pension meant he was entitled to a polite hello, but nothing more.
Lohbado went out on to the Plains of Radiation, without any purpose other than the need to exist until his body became a corpse. He planned to live for the rest of his life and to befriend fellow lost wanderers, refugees and those who resisted the Department of Standardization mandate. For the first hour, after leaving the Domed community of the OOO in the State Secret Desert, Lohbado felt a rush of euphoria. He was free, at last!
Euphoria ran out after about two hours, when his throat burned and he couldn’t find anything to eat or drink. The first community along the bombed out road was abandoned. He met nothing but a wild dog, that snarled and bared its teeth. Lohbado talked softly to the dog and sat on a rock. The dog changed its mind and began jumping up on Lohbado and licking his face. Lohbado resisted the temptation to give the dog a hug. He didn’t want his clothes smeared with dog fur grease and the smell of rancid fish, not to mention the tiny insects crawling on the dog’s nose and around his eyes. The dog followed Lohbado for about half an hour and then got bored and returned to the abandoned village. Lohbado walked for about five hours, to the edge of a viable community. He checked in to the Groggy Inn.


The previous inhabitant of the room, which Lohbado rented at the Groggy Inn in the contaminated village of Effluvia on the Plains of Radiation, a religious evangelist, impregnated a sixteen-year old chambermaid and refused to allow her to have an abortion.  When the child was eight months old, the woman placed him in a bundle and deposited him on a merry-go-round at the carnival. The kid grew up, destined for jail, excess population, which fueled the growing prison industry. The get tough on crime policy helped maintain shareholder value. Prisons offered safe investment, which played a part in keeping a sluggish economy afloat.
Lohbado was the only guest at the hotel that night. He ended up seated in the restaurant and drinking wine until midnight with the manager, a tall, stately middle-aged woman named Alice Swanson. Alice told him about the preacher and the kid. The kid’s name was Red Gunn. After Red got out of jail, he became a minister in the Church of Snow White, where he preached restraint to the Goo-Goo Underground. Half way into a second bottle of wine, the hostess,  Alice Swanson, told him that she had an abortion when she was seventeen. She and a million or so other women had to keep quiet about their abortions, to avoid being stoned by those who fooled themselves into feeling they were in a position to criticize.
To make up for the abortion, she got pregnant again and gave birth to a son. She raised him herself. The father died of a drug overdose two weeks after Jane gave birth to her one and only child.
“My son is thirty-two,” said Alice Swanson, “Max is his name, short for Maximum. At the time I thought of it as living life to the full, to the max. I was so naive, I never thought someone could link the word max to maximum security, as in advanced level jail. The word was a bad prophesy. That name came back to haunt me. He went in at the age of nineteen and came out seven years later, seriously damaged, religious damage. Sometimes in jail, when a person gets really bored and there’s no way to get laid, they turn to religion. I don’t mind him this way. He got a job varnishing floors. The doctor made him quit that job. Fumes from the floor varnish damaged his nerves and knocked out brain cells. Brain damage made it easier for him to see auras and to do astral travel. He’s paying the rent as a psychic. I’m proud of Max. He sniffs out dirty laundry and gives it a floral spin. A person walks in feeling bad and leaves feeling good. Max has that ability. He’s my hero.”

That night Lohbado had a hallucinogenic dream. He woke up moaning in darkness, not sure where he was. For a moment, he thought maybe he was dead, until a popping sound and an explosion of white light ended the darkness. He had a vision of his father, the Reverend Stonehenge Stumps, a preacher from the Church of the Living Monument. His father died twenty years ago, of sudden cardiac arrest, at the age of fifty-five, a week after he found out that his oldest son Tony was addicted to heroin and ended up in hospital with hepatitis, after using an infected needle.
Stonehenge told Lohbado that he had to choose between the angel and the devil. At first, Lohbado thought it was a joke. It sounded too much like the scenario from the comic book that he read in the lounge area as he waited to receive his discharge papers from the Department of Standardization. Lohbado enjoyed religious adventure stories, the little dramas of good versus bad, between upholders of morality and egotistic fools out to ruin it for everyone. He liked best those comics about megalomaniac villains and their plans to wipe out the world population, so that he or she and a group of friends could enjoy wealth and luxury, undisturbed. At the end of each story, a hero would punish the villains and restore order.
Instead of replying to Lohbado’s questions, the ghost of Stonehenge sat in the hotel room chair, at the desk and began reading gossip magazine articles about breast implants and middle aged celebrities running after nymphets. It was all wrong. His father was supposed to represent the forces of good, but instead, he was enjoying the fruits of sin. Lohbado knew it was a joke, but not a funny joke. There’s nothing funny about being confused. Lohbado burst out laughing.
At that moment, Alice Swanson opened the door and flipped on the light. She’d gotten up to  look for painkillers in the night and happened to pass by Lohbado’s room just as he began making noise. Ever since the Apocalyptic War, Lohbado slept with the door unlocked, to make it easier for him to escape during a catastrophe. Alice, in a white terry cloth robe, rushed over to Lohbado, who sat up naked in bed, as the ghost of Stonehenge vanished. Alice’s dark brown hair, streaked with grey, fell in disorder about her face as she sat on the edge of the bed and exclaimed how Lohbado was soaked in sweat. She grabbed a towel from the bathroom and gave it to Lohbado.
He told her about the hallucinogenic dream. She agreed to spend the rest of the night with him, to make sure no ghosts or evil spirits returned to disturb his rest.
Posted by Lohbado at 12:56 PM