Veteran of the Dome 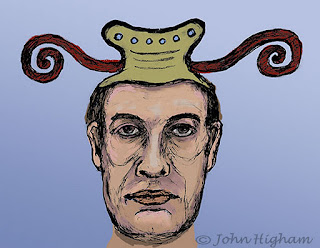 As he prepared to go out for morning coffee, Lohbado knew he’d been exposed to radiation, but not enough to seriously damage his memory, the way it affected the OOO. The OOO experienced severe memory loss, which is why Lohbado was hired. He was hired as a Trainer, to teach the OOO what they needed to know in order to survive in post-apocalyptic society.
A cold winter morning, Lohbado put on his arctic parka. Don’t fly off the handle. It’s cold outside. Try to avoid empty chatter, the drip of nonsense. Lohbado walked down the icy sidewalk, past a row of houses, ending in a warehouse.
He crossed the street and entered a small plaza, lined with oriental restaurants and a grocery store. Lohbado lived in a neighborhood, not the best, not the worst, the romance of being where you are. Would you like a companion? A woman with beautiful, jet black hair nearly bumped into him at the corner. Without looking at him, she hurried off in another direction.
Lohbado entered Lumpies Donuts in the strip mall. He ordered a coffee and sat at a table along the wall. It’s easy to get carried away, a little too excited. Over the top is a popular expression. In a moment of strong emotion, the night before, during a discussion with Henry, Lohbado voiced an opinion. Henry got angry and scolded Lohbado. It was too late. Lohbado couldn’t retract his opinion. He didn’t even believe what he was saying. It would be better if he didn’t talk nonsense.
Posted by Lohbado at 6:13 PM