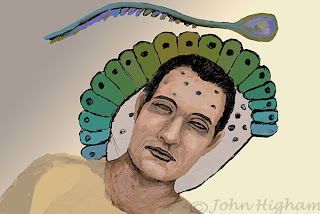 Even though Lohbado wasn’t superstitious, a dead cat beside the hedge at the edge of the sidewalk, made him stop. He bent over for a better look. He’d seen a few dead humans, but not so many cats. A lot of folklore rushed through his mind, the black cat on a Friday. Six cats all at once meant the devil was nearby. A cat stuck in a tree meant bad weather ahead. If a cat hissed at you from a doorstep, better not enter in.

The dead cat beside the hedge made Lohbado nervous. The word death flashed through his mind and sent a shiver up his spine. The cat had been dead for a few days, judging from the throbbing mass of wriggling white worms busy eating the remains. There must have been about a thousand maggots, pulsating in waves of unison. The pungent odor of rotten meat went deep into his nostrils. Lohbado straightened up and kept going. He had the directions to Gary’s place. He lived on the second floor of a three story apartment block at the top of a hill.


A set of wooden stairs lay directly on the side of the rocky hill. The banister swayed as Lohbado went up the stairs. Some planks were missing. He had to be careful where he put his feet. Weatherbeaten wood, a flimsy set of stairs on rubble, Lohbado took it one stair at a time. When he reached the stop, a plain concrete block building appeared about a hundred paces from the crest of the hill. It was called the Hill Crest Apartments.


The steep set of stairs tired him out. He stood at the top of the stairs and gasped for air. The horizon spun around for a moment and he could see stars, as a wave of nausea swept through his body. That was part of the sickness, from radiation exposure. Lohbado had it mild. It wasn’t debilitating, but it made him tire easily. Sometimes he felt the poison in his blood. As his body weakened, he had a hard time concentrating. His mind drifted  away. He sat on the rubble for a moment and gazed out at the plains. Maybe he should have stayed a few days with Alice, at the last hotel. She told him he didn’t look too healthy. He could have taken a few days to rest. It wouldn’t have made any difference. He didn’t have to be anywhere at any time. He was under no pressure. His only instructions were to say as little as possible and to avoid being noticed. For company, he could nod a friendly hello to fellow lost wanderers or veterans of the dome.


Get used to being alone. Make peace with yourself. Ralph told him this. Ralph was a wise man, highly respected in the dome. He would never lose his job. He had guaranteed employment for the rest of his life, unless another nuclear war turned everything upside down again. Ralph was a picturesque, imposing man, with a rich, pleasant voice and a thick head of hair. His natural charm made him a born leader, even if he didn’t feel like leading any one. People would talk to him, as if he were an authority on whatever topic one might raise.
Stop thinking so much!


Lohbado shook his head back and forth to clear away thoughts. He contemplated the rolling gravel plains, brown, a bit of dark green, gray, silver and blue. Ridges of rock and rubble outlined numerous small lakes and streams. Rock escarpments appeared at random, scattered across the plains. According to folklore, spirits inhabited those rock hills. They said it was dangerous to climb them. It would be foolish to go up there in winter. A person could freeze to death in the fury of cold wind. Lohbado had climbed a few hills. That’s one of the reasons the OOO felt he was weird and a bit crazy.


Lohbado got up and hobbled over to the building. He pulled open the heavy metal-framed door and stepped into the dimly lit space next to the mail boxes. He saw Gary’s name and pressed the buzzer. Somebody buzzed him in. He pulled open another metal-framed door and walked up the concrete steps and down a beige hall to Gary’s apartment. Gary’s wife opened the door and led him into the kitchen. He caught a glimpse of Gary, stretched out in bed. A musty smell of sour cabbage and rotten broccoli wafted out of the bedroom.


Lohbado went into the bedroom. The fifty-year old man sat up and swung his legs over the side of the bed. His shirt hung open.
“I’m going to pray tonight at the church,” said Gary, who had been a church elder about twenty years ago, before the war.


Ribs poked through his leathery skin. A soft little sagging belly hung over his boxer shorts. Lohbado was surprised to see such thin legs.


“There’s no church around here,” said Ann, “The church got blown to smithereens during an air raid.”


Ann sounded annoyed and a little embarrassed about her husband's confusion. She found it both shocking and embarrassing to watch him deteriorate so quickly, over a period of six months. There was nothing she or anyone could do about it. She couldn't heal his damaged brain. At the age of fifty, he was literally standing in death’s doorway. She feared what would happen after he died. It would be the first time she ever lived alone. She would move to a smaller apartment.


Gary pressed his thin lips together and nodded his head a few times, as if trying to figure out where he was or what was going on. Lohbado listened to the sound of the radiator and the sound of Ann preparing a pot of coffee. Some heavy footsteps tapped out a sequence from one end of the apartment above to the other. Lohbado suddenly felt drowsy and weak.


“Why don’t you lie down next to me,” Gary suggested, “There’s plenty of room.”


“Gary just passed away,” she said, “He just took his last breath.”


Lohbado gave her a hug to express his condolences. She grabbed the phone and called an ambulance. She would be busy for the next few days. She had to close his bank account, see a notary about the will, make funeral arrangements and contact his brother to give him the news.