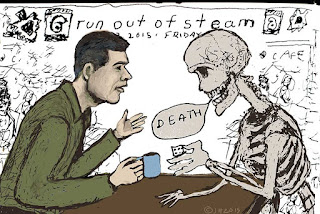 Nobody lives forever. Artists have illustrated the dance of death for over a thousand years. Lohbado's favourite was the one done by Hans Holbein. In previous centuries, people didn't live so long. There were plagues, in which an estimated 30 to 60 % of Europe's population was wiped out. Egypt lost about 40 % of its population to the plague during the 14th century. Death was out in the open. Since life is so fragile and of limited duration, this raises the question of how to live one's life. What is the best way to live without wasting time? A lot depends on one's attitude. A huge variety of attitudes are common, for example, nihilism, hedonism, materialism and various religious and spiritual orientations.


Personally, I find the mystery of life more mind blowing than trying to figure out what happens after one dies. Why is life happening? What's the point? These are unanswerable questions, but fun to contemplate. Life is happening because it appears to be happening. One has a body, an identity or sense of self, which changes. Lohbado at 60 was quite different than Lohbado at 20. Eventually Lohbado will be dead and forgotten. Pretty funny in a way. It made Lohbado want to start dancing, the dance of death. Grin and laugh at the vanity of human lust, hunger for power, greed, aggression, intolerance, ignorance... Lohbado decided the most meaningful thing he could do with his life would be to relax and try to be patient, cheerful and friendly, to listen, to pay attention and to try to understand.
Posted by Lohbado at 10:48 AM