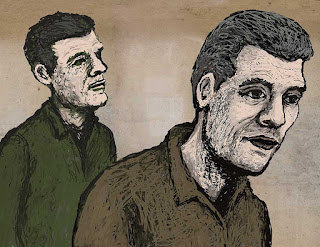 Lohbado plus Lohbado equals Lohbado. One Lohbado is composed of many Lohbadohs. Even the name Lohbado has two letter Os, which serve as lenses or portals plus circumferences around space.


The above image is like a snapshot of Lohbado contemplating Lohbado. The instant of the image occurred faded into memory. Lohbado is no longer the same as he was then. The way he is now is in the process of changing. He's getting older, slowing down, running out of steam and facing the increasing likelihood of eventual death. Nobody is immortal. One can only ignore mortality for so long, until one day, the moment of death arrives. Meanwhile, what is the nature of being? What does it mean to be somebody? Ok, this is a story, part of a fictional memoir, Lohbado pretending to be Lohbado, because he happened to live alone and so had no other company than himself.

Under the various phases or instances of Lohbado, what would be the essence of Lohbado? How would Lohbado be defined? Would one provide a loose description or list of features and habits, or is it possible to find the essence of Lohbado, the Lohbadesque as an abstract enduring form similar to a generalized mathematical concept, for example, a triangle? Lohbado had no idea, other than a sense of consciousness which appeared independent of time, the sense of being a changing somebody in a changing world. Some sort of voice comes to one in the dark, as the narrator of Beckett's Three Novels described it. But what exactly is the nature of this voice? Where does it originate? Maybe there is more than one voice.
Posted by Lohbado at 10:41 AM