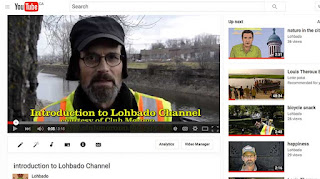 click on picture to see video. On a rainy day last week Lohbado made an attempt to provide an introduction to the Lohbado youtube channel, during a bike ride along the Lachine Canal in Montreal. While editing sequences, he deleted a lot of baloney and did his best to keep something semi-intelligible. The trouble with creating video; at the time it seems cool, but then you look at it a second time and wince. The wise thing would be to abandon the effort. However, Lohbado isn't wise. He persists. It's part of the creative process. Lohbado views video making as an art form, similar to painting.

Instead of using paint on canvas, Lohbado uses video mode of his camera to record color, form, motion. With a camera, one composes scenes and allowing room to move about and to even speak a little poetry, stories or silly chatter. The urge to create and communicate is a basic human instinct going back to prehistoric times. Art objects have been found dating back to 60,000 BC.

A proper introduction to the channel would require careful planning and organization. What was Lohbado thinking? Did he honestly expect to be able to provide an explanation during a long bike ride? Well, in this case, he's dead on. This is the Moronovian Way, to interact with situations as one drifts through the river of time. Whatever you say will not be the whole story. It's a case of picking and choosing. A topic could be explored from many angles, narrative, conceptual, psychological... The sky is the limit. The main thing is to have fun. Lohbado frequently told himself: don't take yourself so seriously.
Posted by Lohbado at 8:44 AM