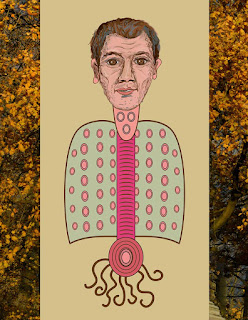 As Lohbado walked through the cemetery, he tried to imagine what would happen if graves opened and dead came out of the ground and began talking all at once. This thought filled him with a hollow sensation, as if suddenly what lay under the skin became visible, brightly coloured shapes and patterns of organs performing various bodily functions and keeping the body alive.

Along with a body is a sense of self. Lohbado tried to imagine some sort of creature in his head, a director or overseer of his body/mind continuum. The grinch in his head responded to the slightest provocation or insult. The funny little boss in his head insisted on being right and refused to admit mistakes. His ego was too big to even consider the possibility that he could be fallible. It was always somebody else's fault. There was always somebody or something to blame. It was never his fault, because he was himself and he knew what was best for himself and the world. The world should bend to his wishes. Everyone should do their best to ensure his happiness. His skin was sensitive to anything that might wound his vanity.

Lohbado laughed at ego's childish sense of omnipotence. He suddenly felt like a clown. He did a little skeleton dance in the graveyard, then continued on his way up Mount Royal.
Posted by Lohbado at 8:49 AM