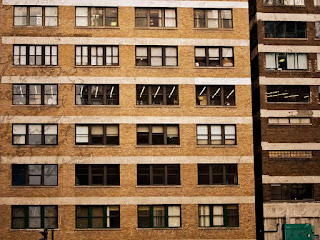 A loud honking noise startled Lohbado. He realized he'd been gazing at a building, without it registering. His mind had been far away, imagining the ocean, walking barefoot in the sand while clouds created spectacular light effects and birds flew around. In the middle of Montreal, it was like he'd been transformed to some sort of paradise and completely forgot where he was, until a van honked as he was about to step out from the curb.

The shock made things vivid. Grid-like rectangles of brick buildings impressed into his mind the reality of many rooms filled with people doing many things, a variety of human experience. He felt a sudden urge to confess. Forgive me for being sloppy. After confessing to the brick wall and windows, he resolved to watch where he was going.
Posted by Lohbado at 10:26 AM