the ability to talk about nothing 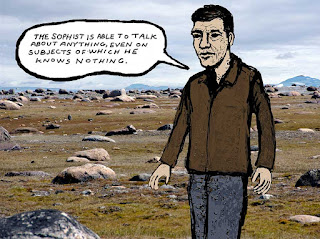 To talk about nothing is a paradox explored in Plato's Sophist. Lohbado sat in the park this morning, as the temperature went above zero in Montreal. It felt balmy in the sun, as if spring had begun. He sipped coffee and read a few pages of a library book, in French entitled Le Sophiste. He began with section 232, where L'Etranger (the stranger) discussed the nature of the sophist with a young man named Théétète.


The sophist during the time of Plato in the 4th century BC was a person who made a living "selling knowledge", or instructing young men (women didn't have equal rights in ancient Greek society) on the art of winning disputes. It was a skill desired among wealthy young people desiring to enter the field of law or politics. The sophist cashed in on the situation by promising to teach everything one needs to know in order to succeed in winning one's cause. To attract a following, the sophist gave the impression of knowing everything. The sophist loved to contradict or disagree in order to start and win arguments. They weren't concerned about truth or justice. Their motivation was to win and to create a reputation for themselves which would translate into lucrative teaching contracts.

The know it all sophist would even argue with and contradict people who were experts, even when the sophist had no knowledge or experience of the matter being discussed. Their technique was to contradict whatever was said, no matter how knowledgable the person and no matter how little the sophist actually knew. The stranger asked how could a man who doesn't know something generate a meaningful argument with a person who knows? By what miraculous means could the sophist give young people the impression of being wise on all subjects? Of course, if the sophist was honest about his ignorance, he wouldn't attract paying students; therefore the sophist resorted to bullshit. And their bullshit seemed to work. People loved it. The sophist would disagree with whatever someone said, would mutter some nonsense in a convincing manner and people found it attractive. There's money in bullshit. Honesty is not always so sexy. People don't want a good book, they want a best seller. People mistook them for wise men. So where does the know it all attain his power, given the fact that it's literally impossible to know everything?

Plato's dialogue then shifts to the topic of imitation, copy and illusion, of words as spoken images and how one creates appearances. This is in preparation for the big question, how does one talk about nothing?Nothing does not exist. In a sense, nothing is non-being. That's as far as Lohbado got in his reading this morning. Being or not being, that is the question. Is it possible that non-being could exist? Isn't that a contradiction? How can you say that something which does not exist exists?

It's an exciting book. Lohbado will read more at the first opportunity.