the mystery of non-being 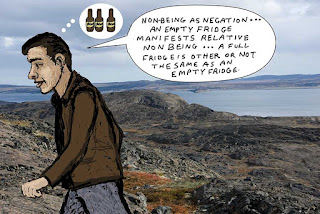 Lohbado just finished Plato's Sophist. To avoid acting like a sophist and serving up generous helpings of baloney, the wise thing to do would be to start reading it all over again. It's the kind of book that requires careful study. However, this is a story, part of Lohbado's memoirs. In the story, Lohbado read the second half of Le Sophiste while standing in the kitchen. Sometimes it's easier to concentrate when standing up than sitting down. So... non being, what does it mean?


On an absolute level, there is only being. Non-being is an impossibility. If you could so much as think, let alone say anything about absolute non-being, it would exist, in the very least, as a concept or thought. While pondering this, Lohbado thought of how a thought can't exist without an object. A thought by nature is divided into the thinking subject, the act of thinking and the object of thought. Try to think nothing. The intention to think nothing is already a thought before you even make the attempt. Absolute non-being, if one means the opposite of being, would be unthinkable, inexpressible... aaaaaaaaaahhhhhh. ooooooooooo000000000ooooooooo cha cha cha..... outside reality.

As for the professional sophist, a paid purveyor of baloney, images, illusions, falsehoods or lies, the question was raised, is telling lies a form of non-being? A lie could be described as saying the thing which is not. To say the thing that is not is a relative type of non-being. A true statement would have a corresponding object in reality. A false statement could be based on confusion, as when one sees a mirage. But in the case of a sophist, one might fabricate lies to impress an audience. This leads to a discussion about the nature of speech, or talking about things. What one says could be viewed as a representation or copy or something existing in the material world. One's description or discussion is a step away from what is being described or discussed. It's an intellectual abstraction of something occurring in physical reality. A painting, text or oration is like a verbal/intellectual copy or representation. There could be huge discrepancies between what one says and the way things are. The professional sophist doesn't care. He's out to contradict and to impress an audience. What he says could be riddled with falsehood, or the negation of truth. To speak negation of truth is to talk about things which on a relative level don't exist in reality, other than as sounds coming out of the mouth, which might create an illusion of truth.

On an absolute level, there's no such thing as non being. On a relative, every day level, non-being could mean negative, or absence, other, different, not this, but that... and so on.

Lohbado read the book in French: Platon, Le Sophiste, translation, introduction and notes by Nestor Cordero. Paris: Flammarion 1993. Lohbado had a beer, brushed his teeth and went to bed.
Posted by Lohbado at 10:59 PM