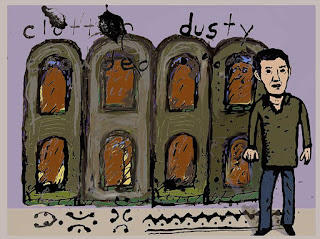 Lohbado spent the day browsing through his collection of books, post cards, art objects and oddities; perfect activity for a drowsy day. Sometimes his body felt so heavy and tired leaving no choice but to slow down. He stood in front of shelves and cabinets. He decided to work on videos about the books in his collection.


He had fun rereading sections of Logique du sens by Gilles Deleuze, about different surfaces or planes of reality. Tensions between the depths of the pre-linguistic subconscious skin and the metaphysical surface of speculation, not to mention how sexually was enmeshed in a system of language spanning nonsense and sense, the book could be enjoyed as fantastic poetry, an inspired overview of body and mind, with attempts to describe what is going on.

The book requires a careful reading. At a glance, Lohbado appreciated the discussion about interaction between physical and mental, between the force of eros and the quiet speculation of thanatos. Deleuze makes use of Freudian concepts in the exploration of forces within the body/mind continuum and how these forces could shape one's understanding of existence. Ok, too much for a mouthful, "manger, parler" (eat/speak).

If the project works out, Lohbado would like to do a kind of show and tell, presenting various books from his collection and saying a few words about why he finds them fascinating. On the list would be works such as Blue Cliff Record, Finnegans Wake, Husserl's Idées directrices pour une phéneménologie, Flaubert Bouvard and Pécuchet, Adorno Dialectique négative... It depends on Lohbado's stamina. Getting old is like a tire slowly running out of air. Slow and steady wins the race.

Ok, time for a bike ride. Road conditions are not too bad. Rush hour is nearly over.
Posted by Lohbado at 6:58 PM