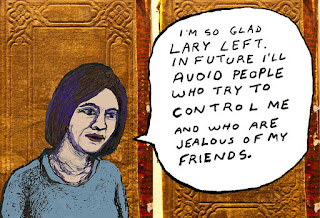 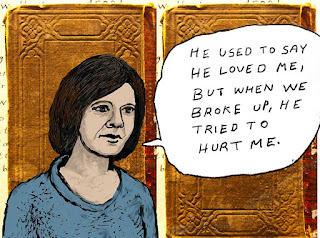 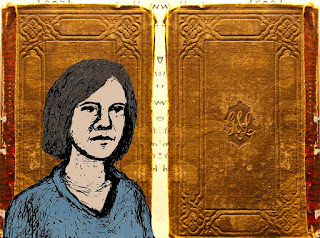 The Moronovian Encyclopedia of Romance contains a long chapter on breakup. Sometimes during breakup a character's vanity is wounded, or the person feels heart break and rejection. Sometimes the change was long overdue. Maybe both partners were getting on each others nerves, but stayed together out of habit, or because breaking up was too much hassle. Eventually, something happens to act as a catalyst. Maybe one person becomes jealous and increasingly tries to control the other until things intensify to breaking point.


Proust's epic novel of introspection, À la rechereche du temps perdu begins with the narrator lying alone in the dark and remembering the distress at being deprived of a good night kiss from his mother as a boy. This event left a heavy imprint on his mind and often surfaced in his consciousness as an adult. The narrator felt a need to imprison or control the woman he loved. When he fell in love with Albertine, he insisted she tell him everything she did, where she went, who she talked to, what she said, what the person said. It became oppressive for Albertine. He sensed she wanted to escape. He felt the anxiety he felt when deprived of his mother's kiss. He became jealous as he realized there was a side of Albertine he would never know, that lay beyond his control. He suspected her of having lesbian love affairs. He even sent his servant to make love to one of his wife's lovers. While doing so, the woman demonstrated how she put Albertine with the angels.

The narrator equated jealousy with love. When he felt jealous, then he knew he was in love. If he wasn't jealous, it wasn't love. Being a victim of a jealous person is oppressive. The relationship ended when Albertine packed up and left, at the end of the section called La prisonnière.

Humans are filled with insecurities and want to be loved. Jealousy happens. The only solution to a failed or worn out romance is to get over it. Let go. Move on. Maybe everybody wants to be loved and when the love wears out, the person gets very angry. Or maybe the jilted lover is a self-centred psycho. An excellent book to deepen one's understanding of jealous romance and numerous other spiritual and philosophical concerns is the above mentioned novel of Marcel Proust.
Posted by Lohbado at 7:39 AM