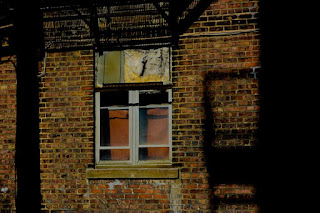 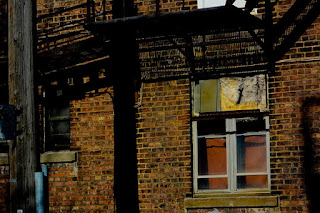 The dark shadows, old brick and funky odour of the buildings evoked a presence of Peter's grandfather Woodlot and father Stonehenge. Lohbado, born Peter Stumps, could still hear their gruff voices. When Woodlot talked, it sounded like an axe repeatedly hitting a stump. When Stonehenge talked, it was more like a huge crosscut saw methodically sliding back and forth to cut down a huge white pine. Even Grandmother Aida Stumps was into cutting wood. She made sure the woodpile next to the huge cast iron stove in the kitchen was always well stocked. When Peter was a boy, grandmother would let him take hold of the ceramic handle attached to an iron arm. He would open the top of the stove and drop in a piece of wood. Sometimes she let him open the door of the stove below and shove in a log. Grandmother had a tall paper white bee hive hairdo. Large blue-green veins puffed up in the back of her hands. Peter longed to touch her hands. He felt close to her when she let him play with fire.


The brick walls of the old Stumps house were old, with a musty smell of earth and compost. The old window panes rippled, creating slight distortion. Peter Stumps enjoying looking through the window panes, especially on a rainy day, which made the lush greenery soft, a visual field of green, blue and silver. Peter remembered one afternoon, standing outside a brick wall of the house when an eerie sensation swept over him, as if the house was a living creature, reaching out to embrace him, to comfort him with its odour.  The memory was from before 1969, the year Reverend Woodlot Stumps died under the oak desk, forcing Reverend Stonehenge Stumps to take charge of The Church of the Living Monument.

After grandfather died and father took over, it was all down hill at the Church of the Living Monument. Peter's father Stonehenge lacked the charisma or charm of grandfather Woodlot. Woodlot hewed the wood church out of the boreal forest in a region of precambrian shield after he got back from World War 1. Woodlot inherited cutting rights, a license  dating August 1, 1880. Instructions were to cut down all trees in the region. Don't leave one tree standing, otherwise competitors might come in and steal it. The cutting went ahead full stream until World War 2 changed everything.

Woodlot Stumps registered the Church of the Living Monument on March 21, 1927. Peter's grandfather was a huge, picturesque and very likeable man. He drank a lot of whisky to dull the pain in his lower back from when he got pinned under a falling tree. The branches provided a buffer, otherwise he would have been crushed. He got in the habit of visiting the lumber camp and drinking for days on end. He loved being out in the bush. Then one day he had a terrifying dream in which he ran out of the shack in the moonlight to take a pee when he noticed blood oozing from the stumps of recently cut trees. The entire section was bleeding. The surrounding trees became like angry creatures, glaring at him, their branches waving as if the forest was about to start marching towards him. He thought of the forest of Arden marching towards Macbeth. He imagined himself in a sea of blood up to his neck.

He knew the alcohol was playing tricks with his mind. He kept promising himself to cut back on the drinking. He would reduce drinking starting next week, next month, next year. He kept pushing back the date to enable himself to keep on drinking while promising at one point to reduce. Drink less, once the worst was over. The Woodlot Lumber Company was at its peak. He owned three buildings in Roaring Water. His family would be setup for life. That was the fantasy. It didn't work out according to plan. Woodlot had many children with many women, many of them local Algonquin women.

Legal settlements drained the family fortune. Stonehenge was too impractical to do anything about it. Grandmother Aida was in another world. Money matters didn't interest her. Con artists charlatans and fake-healers took advantage of Woodlot's alcohol-damaged brain. One night in a fit of rage in his office, Woodlot died. Aida discovered the body. She heard the shouting and commotion at midnight and ran downstairs to have a look. She and Woodlot had been alone in the house. It's considered impolite to talk about such matters. It took Peter Stumps a long time to sort together the fragments to form a picture of what happened. Woodlot had taken the hunting knife he used to skin moose, elk, deer and bear and disemboweled himself. He collapsed under the huge oak desk, his intestines oozing out, a pool of blood.

After Woodlot was buried in the local cemetery, Stonehenge did his best to maintain the church. Woodlot had sold the lumber company ten years ago. A fire had razed two of his buildings in town. There wasn't much left in the way of assets in the Stumps family. This suited Stonehenge fine. He wasn't a materialistic man. He viewed life as a kind of prison camp where people are punished in preparation for death, when people would be released into heaven, where they could float around in glory and praise God for the rest of eternity.
Posted by Lohbado at 7:50 AM