in praise of O 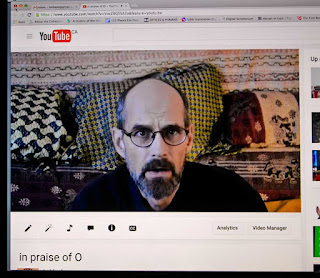 Lohbado began an exploration of the alphabet in praise of O. O is like a portal to the infinite, an expression of surprise, Oh! and a symbol of form and space.

Lohbado began exploring the Moronovian alphabet with the letter O. This might be surprising. Generally one might begin with the letter A. Why did Lohbado start with O? Oh has more overtones than could be mentioned in a short video; so Lohbado focused on a few implications.

O represents form and space. It’s a circumference around space and occurring within space. It’s a donut-like form that could be imagined as an abstract symbol in one’s mind. One could picture some sort of generic O without any features or any particular physical characteristics.

O could symbolize an aspect of one’s existence. One exists within a circular horizon. Planet earth is round. If you go up a hill, the horizon could appear in a 360 degree circle. One circulates within a mental horizon or set of values, customs or traditions. O could symbolize society as a container of conventions and rules, for example, a green light means go. Red light means stop. Amber means caution. The social setup is like a container without corners. This occurs because of that because of the next thing which leads back to this, or the starting point.

O could represent the joining and mutual interaction of thought and object. Is is possible for a thought to exist without an object?  To ask this question sets up a duality between the questioner and the object or concept in question. Thought and object have a circular relationship and perhaps are inseparable. One might create a conceptual separation for the sake of discussion. Each thought has its object. Each object influences the person having the thought about the object. The object influences how one thinks about it. How a person thinks will influence one’s perception about the object.

Each person exists in relation to others. One thing leads to the next. Infinite connections occur which lead back to the observer or starting point.

O, an expression of surprise and wonderment. A gasp of pleasure, oh oh oh! One could even read The Story of O.

O could represent circulation or motion. Blood circulates throughout the body. One flows from day to day within a set of habits and conventions. The days occur in a circle of repetition from morning to night to morning as the earth rotates on its axis and revolves around the sun.

O is a portal into the infinite. From the vantage point of the circumference of O, one could gaze at the space contained within the circumference and one could gaze outwards at surrounding space. The circumference itself is comprised of infinitely divisible points. One is part of a cycle of nature, birth, old age death. One’s existence is an expression of elements in the natural world. One survives as a biological being. One dies and becomes ashes or dust. The world continues. More people are born. Time and space appear to be unlimited.
Posted by Lohbado at 3:52 PM