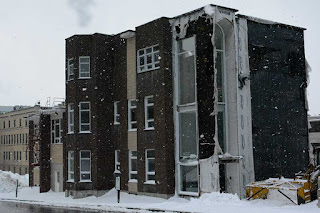 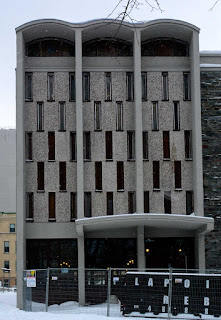 Lohbado woke up as it continued to snow. He stood in a doorway of his apartment and listened to a distant motor, maybe a snow blower. It reminded him of the noises of planes in the arctic, the Twin Otters and Dash-8s. The motors had a pleasant hum which carried across the tundra, a sense of excitement. Someone arrived from somewhere. Someone was leaving. It gave the feeling of standing on the edge of the ocean as a ship pulls in, then quickly the ship leaves. One returns to the silence of the tundra. Sometimes the only noise was the sound of ringing in the ears, or wind roaring past huge rocks. Once in a while a snowmobile would pass by. Lohbado felt like a dot in the wilderness of ice and snow, no trees.


Lohbado put on his coat, boats, hat and gloves for a walk up the hill to buy bread at the bakery. Walking in the city was a lot different than walking out of a village, north of tree line. In the city he heard backup signals, snow ploughs, motor vehicles and a white roar around the sonic horizon. He enjoyed the contrast of dark branches and white snow, or the saturation of red brick as the snow came down. He walked slowly, in order to not fall. He gazed at an oriental rug in the window of a dollar store and at a pair of jaws and white teeth grinning. Smile. Don’t take your thoughts so seriously. You’re a flickering point instant within the infinite cosmos. Lohbado laughed as he gazed at the grinning jaws. He often took himself way too seriously. He’d get into fearful states of mind. He pointlessly generated all sorts of torment for himself. The wise thing to do would be to let the thoughts come and go.  Enjoy being an instant within the infinite, connected to everyone and everything.
Posted by Lohbado at 7:55 AM